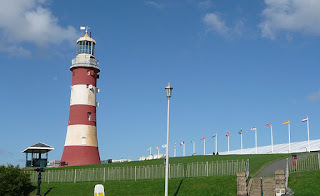 For a reason I no longer remember, I decided my characters, a British soldier and an American actress working as a spy for the Allies, needed to visit Plymouth Sound in England. Perhaps for a little R&R from the rigors of enduring World War II.

As I researched the area, I stumbled across a landmark known as Smeaton’s Tower. Originally, the monument was the third or fourth lighthouse built on a rock called the Eddystone in the mid-1700s.

The Yorkshire designer, John Smeaton, based his design for the lighthouse on an English oak. Though made of stone instead of wood, the lighthouse symbolized strength. Over the years, the unique design withstood the sea’s wild waves, but the tower’s foundation was weak. You see, the Eddystone rock was a cave.

In the 1880s, another lighthouse was built on a nearby rock. The base of Smeaton’s Tower remained on the Eddystone, but the tower, now situated on dry land, became a memorial to its designer.

Without intending to, I discovered more than a mere landmark for my characters to visit. Instead the tower’s story became a symbol within their story.

The American actress had just learned her brother was killed on D-Day. Another brother was missing in action. The British soldier relates the tower’s history then gestures toward the surrounding city.

“Plymouth has been ravaged by the Blitz, but this tower is still here. We’re still here.”
Several chapters later, the soldier compares the actress to the tower.

“In a way, you’re like Smeaton’s Lighthouse. Strong, yet resilient. But what do you rely on when the storm is ravaging?”

“How do you stay strong in your faith, Ian?” she asked. “You, who have lost so much.”

“My faith is built on solid rock. There’s no cave weakening my foundation. I wish you’d accept that, too.”

A little bit of research provided a historical detail that quietly resonated with a message of faith and hope.

Smeaton Tower provides a universal lesson, but often an object becomes a symbol because of its unique and individual meaning.

For instance, I once drove by myself from Florida to Ohio during a winter storm warning. While driving through the Appalachian foothills, my car’s reading of the outside temperature dropped from 16 to 0 in only a few minutes.

A little scared (and a lot distressed for other reasons), I prayed for safety and wisdom.
Soon after, a cardinal flitted across my path, surprising me with its bright red appearance against the snowy backdrop.

A cardinal? Flying around in this weather? 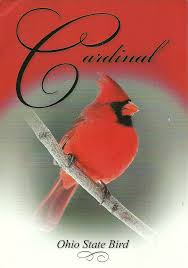 Though I’d lived most of my adult life in Florida, I’m a native Buckeye. The cardinal is Ohio’s state bird. To me, this regal bird was a gift from God and a reminder that I was not alone on my journey.
A character in one of my stories could easily experience something similar.

Sometimes their meaning is universal, and sometimes it’s extremely personal.

Either way, symbols add depth to a story and uniqueness to a character.