So I was wandering around at Lowe's last week looking for a piece of white laminated wood to finish an office project.  My massive collection of CDs has grown into the need for one more shelf, which must fit the precise measurements of an existing bookcase, one with apparently uncommon dimensions, because this has been going on for awhile.

Finding the ideal type of wood in a slightly larger size than I needed, and having meticulously written out the precise cuts I could have Lowe's do, I proudly took both to the cutter man, who was quick to inform me that their machine can't make a lengthwise cut on any wood narrower than two feet. 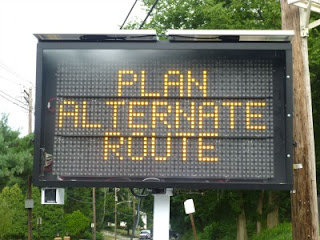 Not to be thwarted, I tried my luck at Home Depot, a block away, where I found an even more suitable size of white laminated wood and proceeded to the cutting station.  Here they had the right kind of saw, but the cutter man said that a lengthwise cut on that type of wood would likely split it all to pieces because of the way it's made.  I asked if he would try anyway, that I'd be willing to take the gamble, but he said they're simply not allowed to cut that type of wood.

Well, shucky durn, I thought.  I left the store carrying not my prize shelving, but a sense of resignation (not to mention self-loathing for thinking "shucky durn"). Having already explored a number of stores and websites prior to this episode, I had now exhausted all avenues of success for my grand plan.

Then it occurred to me that a white laminated CD shelf might not be the best plan at all.  There were other options, but I had been so stuck on my original plan that I hadn't seriously considered them.

I thought back to two days earlier when I was returning home from a long drive.  My GPS insisted that I take the highway, but I knew it was under construction, so I chose an alternate route.  For some miles the GPS kept nagging me to turn around or to take this turnoff to get to the route it had chosen for me.  Finally, it gave up and recalibrated, aligning with my preferred route.

But this isn't about CD shelves or GPS systems.  The bigger picture is that the first route we set our sights on isn't necessarily the best.  It may just be the most obvious one, which is why we get stuck on it.  But there are always alternate routes which could be more to our advantage.

Trained by all the great books and movies that have gone before, we expect story lines to follow certain formulas: when there is this cause, there will be this effect.  Having these mile markers to work from can be an excellent writing tool.  They have stood the test of time because they work. 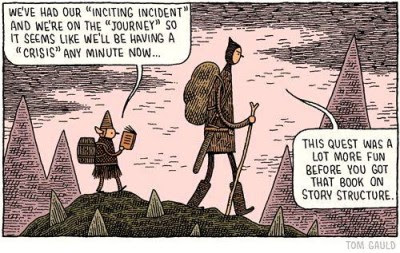 But limiting ourselves to something tried and true (and predictable) can induce its own brand of writer's block.  When we realize in horror that our story is commonplace and has turned into drivel, we will question whether it's worth writing.  Or if we develop a scene or plot that is getting nowhere fast, or has boxed us into a corner, we believe we're wasting our time.

That's the time to ask, Are we taking the best route?  We may have enthusiastically jumped on our first impulse, overlooking a road less traveled the story or characters could have taken.  It's a personal challenge to give up an idea we were excited about, but the reward comes when we recalibrate and our next idea solves all our problems.

And as for my CD shelf idea?  I decided I have way too many CDs.  eBay, here I come.