From Short Story to "Its a Wonderful Life"

It’s a Wonderful Life is one of my favorite Christmas movies. Do you ever wonder how this beloved movie came to be? It started humbly as a 1939 short story, The Greatest Gift, written by Philip Van Doren Stern. It was approximately 4000 words. Phillip tried for several years to sell his story to publishers. Unsuccessful, Stern self-published his story, inspired by a dream Stern had one night in the 1930s. An accomplished author of primarily historical books he was driven to get this story published.

This was 1943, before today's technology. He may very well be one of the first "indie" authors. In December 1943, he sent his story, a twenty-one page Christmas card to 200 friends. It ended up finding its way to Hollywood.

RKO Pictures bought the rights to The Greatest Gift and began casting for the movie which was retitled "It's A Wonderful Life."

I wrote a story, Mary's Merry Gift. It was published May 2015, in an anthology book, titled, "Looking Through the Rearview Mirror." My inspiration was an annual themed Christmas party I attend every year, hosted by my friend, Mary. It's not really about the party. It's about the gathering of friends who support each other by celebrating each other's lives. Most of us would not know each other except through the connection of our hostess, Mary. She has the most generous of spirits and her parties were my inspiration. Upon publication, I gave Mary a copy of the book. She was delighted. 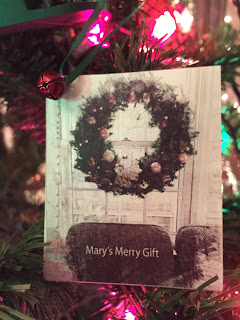 This year at her annual Christmas party I was humbly honored as my story was her party theme. Her guests' favors were ornaments containing my entire story, Mary's Merry Gift. The cover was a reprint of my art created for the book of Mary's Christmas wreath that hangs every year in her sitting room window. It was a picture I took last year of her wreath. I applied a free iPhone app to convert to a sketch.

Phillip Van Doren Stern's story created attention when he sent it as a Christmas card. My story became Mary's theme of the very party which was the subject of my story. All who attended went home with my story in the form of an ornament. It truly is a wonderful life.

Will my story become a classic Christmas movie? Who knows...but it sure is fun to dream.

What about your stories or books, how can you creatively draw interest to your books and stories? What has worked for you?