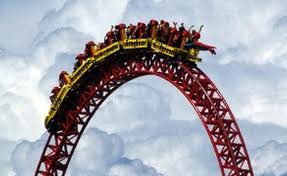 A good story is a roller coaster ride.  It takes readers through a series of twists and turns, saving the biggest thrill for last.  And, gravity being what it is, what goes up must come down.  It's not one continuous fast drop.  Indeed, the slow, steep inclines of anticipation can provide some of the biggest excitement.

Those ups and downs give a story its rhythm, much like breathing.  The action builds, then it lets up a bit, then builds again.  A story that builds and builds and never gives the reader a chance to catch their breath can be exhausting.  If the heart-pounding opening sequence of Raiders of the Lost Ark had  lasted for two hours without a break, brains would have melted.

An actual example of this (well, not the brain-melting part) is 2005's King Kong with Jack Black.  Fun movie with interesting variations on an old theme, but once they get to the jungle it's a nonstop series of action sequences.  The long prehistoric battles are exciting at first, but about the third or fourth one in, they lose their impact and even become tiresome because there isn't a quiet moment inbetween to remind us how amazing these scenes are.

We know that each scene in our story must further the plot, but we can accomplish this in a variety of ways besides continuous motion.  Sometimes the scene will be less about action and more about reaction; the result of what big thing just took place.  The bigger the thing, the more the audience will appreciate an opportunity to consider its implications.  Give them time to sort out the possibilities for themselves and you have a captive, involved audience.

After a scene with a car crash, the quietude of the patient lying in a hospital bed isn't just a natural aftermath, but a welcome opportunity to take a cleansing breath and ponder what the new developments will mean.

Sometimes the pause itself provides the drama.  In the recent charmer Hope Springs with Meryl Streep and Tommy Lee Jones, a particularly important scene is followed by the lengthy closeup shot of a door, which, at that point, seems to last for an eternity.  As we look at the door we are filled with questions: 1) which door is this? 2) which of the two people will walk through it? 3) are they coming or going? 4) will the door even open? and 5) what are the ramifications of each of these scenarios?  It really is a brilliant and powerful silent story beat in its own right.

As a classic soft drink campaign once reminded us, it's the pause that refreshes.  Give your reader a chance to catch their breath before and after your roller coaster's big loops, and they'll stand in line to ride again.