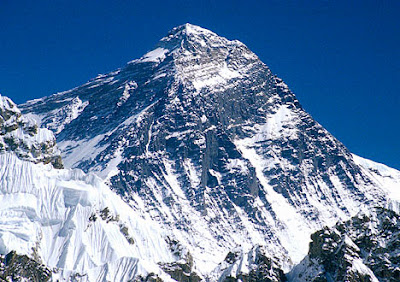 Over 5,000 people have attempted to scale it, and only 1/8 of them have succeeded. Mountain climbers who like a good challenge consider Mt. Everest—the pinnacle of the earth—the ultimate goal.

Achieving our writing goals is like scaling a mountain. A strong determination, the proper tools, and a capability for the craft are essential to begin the climb.  There'll be obstacles on the way up, and moments when you think you just can't do it.  But those who make it to the top of Everest don't let difficulties keep them down.  They envision the pinnacle of the mountain and focus on how magnificent the view will be from 5 1/2 miles above sea level.

What is your writing goal?  If you're just starting out, maybe you simply want to write a book and get it published.  If you're already a published author, maybe your goal is to have a New York Times Bestseller.  If you've already had several bestsellers, maybe you just long for a week off without having to write anything.

I had an interesting conversation with an author this week, one who's been published regularly for years and has enjoyed success by any writer's standard. Even so, they harbor a certain reluctance to claim their success; to own it.  Whether it's humility, disbelief, or a fear of jinxing a good thing, it is hard to say "I've arrived" when you still have mountains to climb.

Indeed, this is a sentiment echoed by most of the authors we speak with.  Even though they became "professionals" when they sold their first article or book, the real goal in their hearts is an ambiguous, uncharted one that they won't even realize they've reached until they get there. And when they do, they'll still keep going.

A true writer writes because they love what they do. They make loyal friends along the way, supporting and mentoring other writers freely.  When they achieve "success," that's not a stopping point.  They thank their lucky stars—and their muse—and keep reaching higher, just from the sheer love of writing.  They do it for the art, not for the accolades. 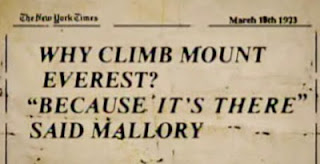 When George Mallory set out to be the first to climb Mt. Everest, he was asked why. His famous answer, "Because it's there," is the same reason many of us write. It's just something we must do. It requires no explanation, nor a measurable achievement to make it a valid pursuit.  It's a challenge; an adventure; a gauntlet we have no choice but to pick up.

May you always find joy in your journey.