Timing is everything, they say, and when our timing's off, we all wish we could go back for a redo. Which might explain the popularity of stories about time travel.

A brand new addition to the field, Looper, opened this weekend.  I haven't seen it yet, but the idea of Bruce Willis going back 30 years in time and meeting his younger self is intriguing.  Demi Moore might even want to see that.  And apparently, so have many others, as Looper was the second most popular movie this weekend, earning $20 million at the box office.  (Family flick Hotel Transylvania was #1.)

Looper joins a long legacy of films and books in which the hero engages in some time-shifting.  Among the most memorable:

(those with * are based on novels)

Source Code (2011)
Jake Gyllenhaal is repeatedly sent back to the same 8-minute time frame to thwart a train bombing. 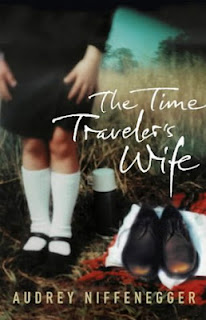 The Time Traveler's Wife (2009)*
Eric Bana has no control over his spontaneous time traveling.

Peggy Sue Got Married (1986)
Kathleen Turner goes back 25 years and reconsiders the choices she made, including Nicholas Cage.

Back to the Future (1985)
Michael J. Fox and Christopher Lloyd visit the 50s, the future, and the Old West in this legendary trilogy.

Groundhog Day (1983)
Bill Murray is a weatherman stuck in a 24-hour time loop.

Somewhere in Time (1980)*
Christopher Reeve falls in love with a girl in an antique picture, and finds a way to meet her in the past.

The Time Machine (1960 and 2002)*
The 1895 classic that started it all, in which the writer himself travels forward hundreds of thousands of years. In more ways than one, H.G. Wells was ahead of his time.

I'd be remiss not to mention one of my favorite books, written by the late Jack Finney (whose birthday, incidentally, is today). For years I've been saying that they should make a movie out of Time and Again, in which an artist goes back to 1882 and has trouble staying there. At one point, Robert Redford even had plans to produce a film version.  Finally, just this summer, it was announced that Lionsgate has acquired the rights and that a director has been chosen.  If Time and Again is successful enough to warrant a sequel, Finney was kind enough to provide that too, via a second novel called From Time to Time.

Call it science fiction, call it fantasy, call it futuristic, but one notable thing about time travel talespinning is that it's one of the few "out there" genres that are accessible enough for almost anyone.

What are your favorites?