Honoring Memorial Day with Letters from the Front 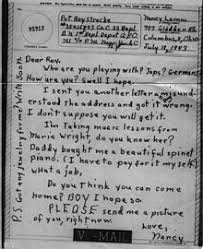 During World War II the cargo ships carrying our soldiers, supplies and equipment overseas to battle would also carry letters to and from the soldiers in the field. Letters were important to the morale of American troops but they had to be light. The British Military had developed what was called “V-Mail” by Americans. It was a process whereby a single page letter was reduced to microfilm form and became thumb-sized images. They replaced the bags of mail and allowed room for necessary war materials.

These letters were reduced to microfilm and transported to various locations, there blowing them up before delivering them to addressees. To me the amazing part of this was the size of the problem. The number of troops and their loved ones writing letters was massive. Each letter was read by censors. Their job was to make sure troops would not be revealing anything that could be used against the War effort.

In the Smithsonian National Postal Museum many of these “V Mail” letters are displayed. They carry messages of joy, homesickness, family news, and love. There were many “Dear John” letters to the troops in the field telling them of the loss of their girl to one who stayed home.

A marvelous example of love, loneliness and tragedy was an exchange of letters between 2nd Lt. Sidney Diamond and his fiancé Estelle Spero. During his three years in the South Pacific they wrote extensively to each other with their love being the constant theme. In one letter Sidney wrote, “Here’s the story and let’s settle it once and for all time—and by heaven’s let’s not continue discussing this matter—I want to marry you—to spend the rest of my life with your telling me to stop biting my fingernails—when?—tomorrow, if it were possible—the day after the ‘duration plus six months’ definitely!”

Shortly after this letter Sidney was granted a leave home where they became engaged.
On Christmas 1944 Sidney also wrote of the despair of war. Yes, today we had a community of thought. All the men—together—in a community of homesickness—Do not think harshly—or scoff at our childishness—We have so little—so little else but dreams—.” He ends the same letter with a fervent protestation: “I love you darling. —whatever happens—be happy—that’s my only request . . .. Stelle, it’s not weakness, it’s not softness—it’s a fact—I need you!!”  On March 5th, 1945 Estelle received news of his death which had occurred a month earlier.

Our Government went the extra mile to provide our troops with the wartime luxury of these letters from home. The Smithsonian National Postal Museum has done a great job preserving these as a part of our history. The letters of 2nd Lt. Sidney Diamond and Estelle Spero as well as others can be seen at their website. https://postalmuseum.si.edu/letterwriting/lw08.html