Based on the Book


Each year at this time, I get a kick out of looking at the Best Picture Oscar nominees with an eye toward how each story originated  This year, a record seven of the eight chosen films were based, at least partially, on books.

THE BIG SHORT
Michael Lewis' nonfiction bestseller about the housing and financial crisis of 2007-2008 was released in 2010, and Paramount picked it up three years later. Dialogue and data-driven, this is one of those films released just under the wire in December, presumably to be fresh in Academy voters' minds.

BRIDGE OF SPIES
Another 2010 book, this true story of the Cold War recounts the politics and negotiations involved in trading an imprisoned Russian spy for an American POW. However, the movie borrows even more from the details given by the actual negotiator himself, James Donovan, in his book Strangers on a Bridge.

BROOKLYN
The only romance in the bunch, Irish novelist Colm Tóibin's 2009 tale is about an immigrant (appropriated named Ellis, as in the island) who comes to New York in search of a better life in the 1950s. Her affections are soon divided between her new home and the one she left behind. A secret marriage is involved, and those always tend to complicate things.

THE MARTIAN
This debut novel by Andy Weir was published in 2011. Those who remember Gravity from a couple of years back were pleasantly surprised when this wasn't simply one more Lost in Space. How a stranded astronaut (played by Matt Damon) conquers insurmountable odds through ingenuity, science and humor was lauded by no less than NASA for its technical accuracy. And as a plus, there were no aliens in sight. 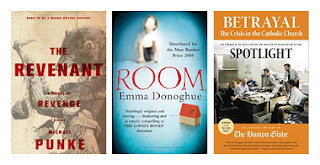 THE REVENANT
A revenant is something that returns after death or a long absence. The same could be said of the book this Leonardo DiCaprio film is based upon, The Revenant: A Novel of Revenge, originally published back in 2002. It took author Michael Punke four years to write what he originally intended to be a political novel. He ultimately turned it into a chronicle about a real American frontiersman, Hugh Glass, who was left for dead by his companions after being attacked by a grizzly bear.

ROOM
Loosely inspired by a real-life incident of a woman held captive in a basement for 24 years, Emma Donaghue's fictional 2010 novel focuses on a young mom (played by Best Actress nominee Brie Lawson) and her five-year-old son, for whom the tiny room in which they're imprisoned has been his entire world. It's not a spoiler to say he gets out, and awakening to how big the real world is becomes an insightful eye-opener for the audience too.

SPOTLIGHT
In 2001, a team of investigative reporters for The Boston Globe followed up on a tip about a priest abusing choirboys. They went to court to obtain sealed documents and published their findings in 2002. The power of the press is the star of this film, though it boasts a full ensemble of familiar faces including Michael Keaton.

The remaining nominee for Best Picture, Mad Max: Fury Road is an original screenplay based on its own continuing sci-fi saga. It may not have made that great a read anyway, since its calling card is the constant visual stimuli of bombs and truck chases.

So over half of the books are based all or in part on actual events. Several (The Martian, The Revenant and Room) feature individuals stranded and endangered. And look how many of them have only one or two words in the title.  That's a tactic that can either help or hurt, but in this case, to say "The Revenant" or "The Martian" subtly implies that this is the revenant or the Martian that stands above all others. This Sunday, February 28th, we'll get to see if that is indeed the case.

For a musical mashup of all of the above, I hope you'll enjoy my latest tongue-in-cheek tribute to the 2016 Best Picture nominees, via this video:

See you in Tinseltown!