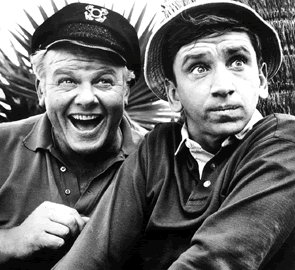 Gilligan and his shipmates would have appreciated the writer who happened to die on this date 231 years ago. Among other works, Daniel Defoe gave us the classic whose first edition title was The Life and Strange Surprizing (sic) Adventures of Robinson Crusoe, of York, Mariner: Who lived Eight and Twenty Years, all alone in an un-inhabited Island on the Coast of America, near the Mouth of the Great River of Oroonoque; Having been cast on Shore by Shipwreck, wherein all the Men perished but himself. With an Account how he was at last as strangely deliver'd by Pirates. The title alone is a three-hour tour.

When we think of Robinson Crusoe, the only thing most of us think of is a man stranded on an island. If we remember anything else, it might be his companion Friday. There’s actually a lot more to the story before and after his years as a castaway, but if we even knew it, it pales in our memory next to the main crisis…one that’s popularly revisited in both drama and comedy. For example: 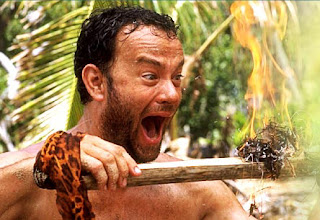 Cast Away (2000, drama) Tom Hanks has meaningful dialogues with a volleyball.

Hmm, note the years of release. Following this twenty year pattern, we can expect another one in 2020. There’s your cue to start writing it, somebody.

Other variations on the “You can’t go home again” theme didn’t even require a tropical island:

The Terminal (2004, comedy/drama) Tom Hanks again, this time permanently laid over in an airport.

The circumstances, backstories and subplots change dramatically (and comedically) but each one speaks to the inherent fear of being unable to get back to where we once belonged. From Dorothy getting stuck in Oz to teens being forced to leave their families in The Hunger Games, writers frequently capitalize on the feeling of total helplessness by placing their hero far from home.

Daniel Defoe’s original Survivor is just one of many plotlines we see again and again, and there’s no shame in taking a great theme and making it original for a new audience.

Ironically, a Gilligan’s Island movie remake was originally supposed to be released last month, but it never set sail. Perhaps the Professor is still working on his coconut camera.