James Cameron’s Avatar. Martin Scorcese’s Hugo. Peter ’s upcoming The Hobbit. Major moviemakers are recognizing and banking on the popularity of the 3D fad. And we’ll call it a fad until it’s been around long enough to prove its lasting appeal, as well as warrant its added expense. 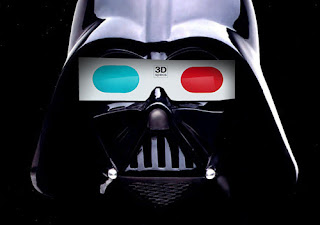 Sixty years ago, moviegoers were treated to a much cruder, early version of the technology we now enjoy with much greater clarity. Anyone who’s ever worn the blocky, poorly-fitting cardboard glasses reminiscent of the fifties remembers their ears getting uncomfortable long before their eyes, which suffered through the fatiguing task of interpreting blurred images of red and turquoise.

Most of the movies made for 3D were equally cheap and cheesy, written around special effects, lending themselves more to horror and comedy novelties than character-driven drama. The Creature from the Black Lagoon and House of Wax are among the few notable and enduring efforts. The Three Stooges even poked audience’s eyes in 1953’s Spooks!

But, much like Curly, 3D was a victim of circumstance.  After a short three year run, the third dimension had pretty much run its course. By the time Alfred Hitchcock filmed a 3D mystery (Dial M for Murder), the awkward medium had met with its own demise, causing him to release it in regular 2D. One can only guess how Hitchcock would have used the effect to great advantage years later when he did Vertigo.

Today, 3D’s highly superior incarnation tricks the brain with polarization rather than offset colors, yet it still only makes sense for certain types of features, like action movies or CGI animation that can take you places where real life (and cameras) cannot.  It’s highly unlikely there’ll ever be a market for Pride and Prejudice 3D. 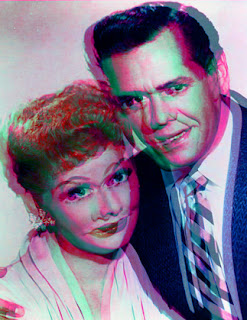 Even as we speak, 3D TV is trying to make headway into our homes, and we have the technology to take existing film and TV material and turn it into 3D.  Someday Ricky Ricardo could be singing Babalu in the middle of our living rooms.

But for 3D to survive this go-round, it must do more than fling gumballs at the audience; it has to immerse us into the story. Which still doesn’t involve visual trickery as much as emotional depth. Titanic, while it has plenty of 3D action, also has lots of plot and character to pull you in. It’s movies like Shark Night 3D that are a mere novelty, but of course that’s their intent, just like a dime-store novel meant for a quick read and an imminent future in the trash can.

As authors it’s easier to jump on the latest gimmick and come up with momentary fluff.  Fortunately, most of us choose to put our efforts into crafting a book that will be deemed worthy of handing down to the next generation.  If we can evoke real 3D feelings in the reader, they won’t have to wear clumsy glasses to immerse themselves in what we write.