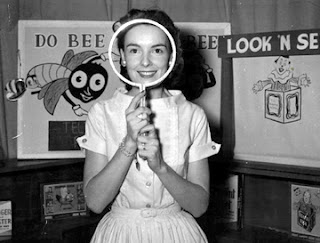 When Romper Room (1953-1994) was on the air, each region did its own version of this kiddie show using a local TV host. Mine had "Miss Jean." I remember little about the show itself beyond its signature segment that always began with these words:

After this incantation, each regional host would look at the camera and recite the first names of a handful of children in her viewing audience ("I see Jimmy, and I see Cindy..."). Presumably these were the kids whose parents had written in on their behalf. Maybe she supplemented with random names for good measure. Even at my young age I considered that possibility, though it was still a mild thrill when she happened to speak my name, and for that moment it did feel a bit magical.

Spreading similar joy to the other end of the age spectrum, weatherman Willard Scott took it a step further on The Today Show when he would congratulate someone on their 90th or 100th birthday and show their photo (brought to you by Smucker's). No doubt these nonagenarians and centenarians got much the same thrill as Romper Room's pre-schoolers did at the mention of their name, age and city.

These simple factoids delivered from stranger to stranger are often our own starting point when we're creating characters for our story. We typically begin with the standard details like their name; we have a general sense of their age, and we place them in some setting. But, like Miss Jean or Mr Scott, we don't know much of anything about them until we fill in some essential details.

At this point, writers will often work up a fact sheet, chronicling such details as the characters' hair color, eye color, height, weight, race, education, where they were born, etc. Some authors go so far as to include mannerisms, pet phrases, quirks, whether the character has an accent, and so on. These tactics are helpful and come in especially handy if there are multiple characters to keep track of.

That said, a fact sheet provides merely a sketch of the character. That's when many authors dig deeper to flesh out their character by exploring his/her motivations, belief system, hopes, and fears. What childhood incident left an emotional scar? What achievements give them strength? What have been the turning points in their life? Answering questions like these brings our stick figure character to life by giving him a soul.

Remember to include irony and conflict in your character's psyche; that is, who they want to be versus what is holding them back. Often they are their own biggest hurdle. As author/philosopher Albert Camus said, "Man is the only creature who refuses to be what he is."

A writer who has clearly tuned into their protagonist rarely regrets having invested the time to do so. The result is an authentic and well-defined character qualified to mirror the magic of your story.