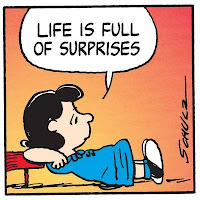 People love surprises when it's something good like an unexpected gift or bumping into an old friend at the grocery store. Other surprises, say an eviction notice or a fender bender, not so much.  But one thing readers always enjoy is the element of surprise in a story.

It's no surprise that mystery readers analyze every clue they can find in an attempt to figure out whodunit, and indeed the whole point is to earn the right to say, "I knew it all along."  But it's an added bonus if something that didn't even seem like a clue turns out to be a missing link.

However, red herrings needn't be limited to mysteries. Don't you love it when someone who works for the bad guy ends up becoming an ally of the good guy? Turning the tables in a twist that compliments the plot or complicates things for the hero makes a story come alive.

Many a tale has benefited from an important person or prop initially dismissed as inconsequential.  A man we thought was a blind beggar warns a young guy about an angry girlfriend he saw enter the apartment building. A birthday bouquet we assumed was sent to a nursing home invalid by her daughter was actually arranged for by a fellow patient.

Another very popular technique is to surprise not the reader, but rather the main character.  Let the audience know the hero is about to inherit a circus.  Reveal that the in-laws are arriving for Thanksgiving a day early in hopes of pleasing the newlyweds.  Being in on an upcoming surprise gives the reader omnipotence, and the anticipation of what will happen when the protagonist finds out allows them to be a virtual participant in the story.

Perhaps the most powerful surprise of all is when the ending turns everything upside down and makes you rethink the meaning of the entire story.  The Sixth Sense and Planet of the Apes did that, and I can't help thinking of Psycho whenever I think of rethinking.

Predictability has a certain comfort factor to it, but it's the element of surprise that enthralls and keeps readers coming back for more.  If you find your story is lacking momentum, inject the unexpected.  You may be pleasantly surprised.