My husband and I used to have an annual Halloween costume party. In the 1990's the hit party game was Six Degrees of Kevin Bacon? According to to Wikipedia, the game is "based on the "six degrees of separation" concept, which posits that any two people on Earth are six or fewer acquaintance links apart. In the game, movie buffs challenge each other to find the shortest path between an arbitrary actor and prolific character actor Kevin Bacon. It rests on the assumption that anyone involved in the Hollywood film industry can be linked through their film roles to Bacon within six steps. The game requires a group of players to try to connect any such individual to Kevin Bacon as quickly as possible and in as few links as possible."

In the mid 1800's you didn't need Six degrees to connect Charles Dickens, Edgar Allan Poe and Edward Manet. Did you know?

Charles Dickens' historical novel, was published in 1841. As fate would have it, Edgar Allan Poe reviewed the first four chapters of Dickens’ Barnaby Rudge for Graham’s Magazine, published serially. Poe predicted the end of Dickens' novel, correctly.  One of the  characters was a chatty raven named Grip.

Fast forward a year later. Dickens planned a six-month family trip to the U.S. Poe and Dickens exchanged letters prior to the trip (which you can read here). The two authors met in person. Poe also met the character he liked best, in person, Dickens pet raven. Poe scholars are in agreement. Poe’s fascination with Dickens pet raven (and his Grip character) was the inspiration for his poem The Raven.

Unlike many authors and artists, Edgar Allan Poe achieved almost instant fame during his life.  For the publication of The Raven in 1845, he was paid a whooping $9.00. Poe however doubted his talent.

During his life he continued to struggle to make a living from his writing. In 1875 he made a French translation of the The Raven, Le Corbeau.  The French version was illustrated by one of my favorite impressionist painters, Édouard Manet. Although this version was not a commercial success, it highlights the talents of two great artists of that time. View and download high-res scans of the engravings here.  The engravings are haunting and descriptive. 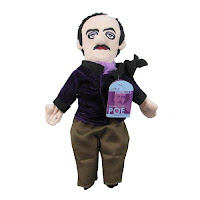 So on Halloween Monday, when the trick or treaters knock on your door, put a raven on your shoulder. Pass out the candy and see if they notice.

You may inspire them forevermore.