If I could tell an aspiring writer only one thing, it would be to never give up, despite the reality of rejection. Once at a writing seminar, a speaker said that to be considered a “real writer,” you must experience at least five rejections. I found this humorous, because I used to keep a manila file for negative replies, before the advent of electronic rejections. When the file grew discouragingly bulky, I stopped saving them.

Still, there was one creative response that I’ve never forgotten. Initially, the national literary agent declined my manuscript proposal tactfully. Then he added, “Even though we are not going to be representing your book, use this letter to line your cat’s litter box and keep writing.”
“Keep writing!” Here’s the primary key for most folks who have been successful in their writing career. They have mustered the emotional stamina and maintained the self-discipline to write with scheduled regularity, perfecting their art to become the best wordsmith they can be.

“We learn by practice,” said the late Martha Graham who is referred to as the mother of Modern Dance. The famous dancer and choreographer explained, “Whether it means to learn to dance by practicing dancing or to learn to live by practicing living, the principles are the same.”

Therefore, it only makes sense that one learns to write by writing. That’s not always easy though, because like most wannabe authors, for years I had to work a day job to pay the bills. This means when your friends are chatting over coffee, enjoying the beach, or shopping at the mall, you have to sacrifice your free time to put pen to paper.

Then there is the tricky feat of continuing to believe in yourself when literary achievement has eluded you. To combat this, at another seminar I gleaned the importance of sending out a new submission for every rejection.

It would have been easy for me to believe that as a writer, I wasn’t that good, despite some sporadic success. Rejection does that. It makes us compare ourselves to others, and many of my colleagues are prize-winning communicators.

Yet over the decades, I had never won any writing awards. Then I happened to read the now classic book, The Prize Winner of Defiance, Ohio subtitled, How my mother raised 10 kids on 25 words or less by the late Terry Ryan.

Evelyn Ryan, [no relation to me] supported her large family in the 1950s and 60s by writing contest jingles. Somehow, reading about the now deceased Mrs. Ryan’s indomitable spirit made me realize that even though the odds are definitely stacked against a freelanced or contest submission, you just never know. 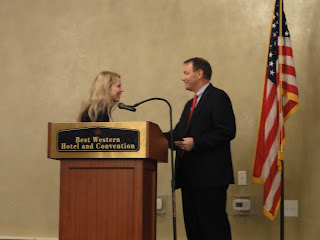 This was my mindset when I sent several submissions to the National Amy Writing Awards in January 2012. In no way, had I ever dreamt that out of more than 700 submissions nationwide, my article, “Finding Forgiveness,” written for The Lima News would be selected as the $10,000 First Prize winner.

In the Bible there is a promise that God will supply our needs. Evelyn Ryan needed to win money and prizes to support her large family, and she did. In the autumn of my writing career, I earnestly needed to know that my perseverance as a writer had been the right life path. Winning the $10,000 1st Place Amy Writing Award was my humbling answer from our benevolent Heavenly Father. An answer, I took to the bank.

Christina Ryan Claypool is an award-winning freelance journalist and inspirational speaker. She has been featured on ’s 700 Club and on Joyce Meyer Ministries Enjoying Everyday Life TV program. She is the 2011 $10,000 1st Place Amy Writing Awards recipient,  and a 2014 Chicken Soup for the Soul contributor. Ryan Claypool is a seasoned newspaper columnist, former TV producer/reporter/host, and also author of several Christian recovery books including Seeds of Hope for Survivors available now. She was a 2014 recipient of a prestigious A.P.M.E. (Associated Press) Award (Ohio newspapers). Her romantic short stories have been published in anthologies by OakTara Publishers, and her inspirational novella, Secret’s of the Pastor’s Wife, will be released in 2015. Christina has a B. A. from Bluffton University and an M.A. from Mount Vernon Nazarene University, where she served as an adjunct instructor in the Communications Department. Her website is www.christinaryanclaypool.com, and she blogs at www.christinaryanclaypool.com/blog1. Connect with her on Facebook at https://www.facebook.com/christina.r.claypool, or on Twitter at https://twitter.com/CRClaypool.