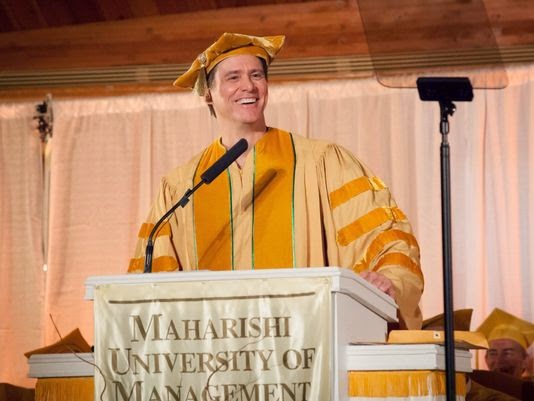 Comedian Jim Carrey’s speech to the 2014 Graduating Class of Maharishi University of Management included the phrase in the title to describe ones reasoning, practicality, for the path they chose instead of the path they love.  Carrey told the story of his father’s love for comedy. Carrey felt his father would have been a great comedian but instead took a practical path. His father chose the safe path of an accountant.  Yet when Jim Carrey was twelve years old his father was let go from that safe job and his family did everything within their power to survive.

I think we all have done that at one time or another. We think we are taking the risk out of life with our conservative choices. We then find that isn’t true. We follow a path that is expected of us and discover that it was the wrong path. Or we may have struck out on our own following our dream only to be reeled back in by our friends, family or our own fears. It is easy to see where we make our choices by fear disguised as practicality. It is the sensible thing to do.

I decided on my current path some forty years ago. I shared with my father my decision and was quickly told, “Son we don’t do that. No one in our family has ever done that.” He was right, no one had. I would be the first. It was kind of scary once you think about it. I was leaving the family’s traditional path and choosing my own. It was also scary to others. Others may come to realize they too can follow what they love and leave practicality behind. At that point of realization they will be forced to make a decision. The decision to remain practical or pursue what you love can be unsettling for some.

Carrey said he had a learned many a great things from his Dad. The least of which was, you can fail at what you don’t want to do so you might as well do what you love. Having heard motivational speakers tell stories of Jim Carrey’s faith in his success, many have used him as an example of determination and perseverance.

Carrey tells us to look to him as an example. Carrey said, “All there will ever be is what’s happening here in the decisions we make in this moment which are based in either love or fear… You can fail at what you don’t want…so you might as well take a chance on doing what you love…”

Our society has been blessed throughout history with those that strayed from practicality and pursued what they loved. My hope is it continues. What is it you love? Will practicality hold you back?