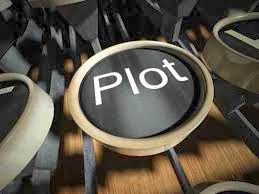 A published author once told me that my stories were weak because I didn’t know how to plot, and she was right. I didn’t—until I learned to line-plot. In a nutshell, a line plot is the plot for an entire novel in one sentence.

Yep. I said one sentence.

To be honest, that sentence is often very long.

Here’s how it works.

Why because?
The word because forces the author to develop a major conflict so strong it seems impossible to resolve.

Part Two of a line-plot
.   Part two tells why the major conflict cannot be resolved by answering the because question—telling why the viewpoint character cannot reach his or her goal.

Now, let’s write a line-plot. It can be fun once you get the hang of it.
There are several genres to choose from when writing a plot in one sentence. Besides the romance novel, there are westerns, science fiction novels, thrillers and more, and in each plot there are always two sides—the good guys and the bad guys.

At first, I had a hard time understanding how there could be two sides in a sweet romance. Romance novels are stories about love. Right?

All novels are about conflict. Boy meets girl. Boy loses girl. Boy gets girl. Without conflict, there is no story. So let’s start with the romance novel and name our viewpoint character.

Let’s call her Laura Ames.
.   Laura is our main/viewpoint character. The story is told through her eyes.
We also need another character, Rob Branson.
.   Rob is our opposing character.
Now, Laura tells her goal.
.   Laura’s goal is to have Rob in her future.
.   Though Laura and Rob have feelings for each other, their romance can never end happily ever after BECAUSE . . . .
.   Unknown to Laura, Rob is engaged to Susan, Laura’s older sister.

Plot in one sentence.

College freshman, Laura Ames, is honored when her secret crush from high school, Rob Branson, starts showing an interest in her after she joins the university debate team, but her dream of a future with Rob can never end happily BECAUSE unknown to Laura, Rob is engaged to Susan, Laura’s older sister.

Part Three of a line-plot tells how the story ends—tells how the major conflict is resolved. In a romance, Laura and Rob would somehow get together. But in a mainstream novel, they might go their separate ways.

Remember the published author that told me my plots were weak? Well, now she insists that plotting is one of my strongest points as a published novelist. Maybe line plotting will work for you, too.

Molly Noble Bull is a multi-published, prize winning author and a native Texan, publishing novels with Zondervan and Love Inspired. In 2011, Molly collaborated with four other authors to publish; The Overcomers; Christian Authors Who Conquered Learning Disabilities. Her Christian Gothic historical, Gatehaven, won the grand prized in the 2013 Creation House Fiction Writing Contest as a manuscript, and it will be published in trade paperback and as an e-book on March 4, 2014 and at a temporarily reduced price for the ebook release. Turn on your sound. Click below to see and hear Gatehaven’s sort of scary, one-minute book trailer.  http://www.youtube.com/watch?v=WRa4h167wHU&list=UUSud14a5OCxl_vBBb1IAf7Q&feature=c4-overview    Contact info:Website: www.mollynoblebull.com
Blog: http://writersrest.blogspot.com Facebook: Molly Noble Bull
Twitter: Molly Noble Bull @ Mollyauthor

Email ThisBlogThis!Share to TwitterShare to FacebookShare to Pinterest
Labels: Do You Line-Plot?, Gatehaven, Molly Noble Bull, Plot in one sentence, The Overcomers; Christian Authors Who Conquered Learning Disabilities.