“The Chain” and Creating Your Author Brand

I finished reading the book, The Chain by Irish author, Adrian McKinty. This book makes you think about your personal vulnerabilities exposed by your presence on various social media platforms. We live in an age where it is thought unusual if you don’t have a social media presence. Your privacy and security are something to definitely consider when creating your author brand on social media.

After finishing the book, The Chain, I googled the author and found out he was a former Uber driver, which his protagonist was in the book. There is an interesting article in The Irish Times on the author. In that article, McKinty says his idea for The Chain, came while he was, “In Mexico City five years earlier, while trying to write a novel about Trotsky (“it was a big fiasco, it was going nowhere”), McKinty learned about exchange killings: where a person offers to swap themselves for a kidnapped family member while a ransom is raised. He’d combined this with the idea of chain letters – he’d grown up in the ’70s and ’80s in Carrickfergus, Northern Ireland, “where we used to get these bloody horrible chain letters; we all believed it”. These were the seeds for The Chain, in which a mother is told her daughter has been kidnapped, and that the only way to get her back is to kidnap another child. And so on, down the chain.” The article at this link is a statement of encouragement to all writers to not give up on writing. 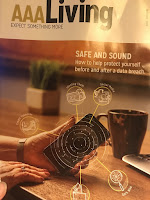 This past week I read in AAA Living, bi-monthly magazine, September-October 2019 issue, the cover story was on security issues with your social media accounts. In the article titled, “Social Media Self-Defense,” it states, “You’ve likely heard of financial identity theft, but your social media identity can be stolen too. What can thieves do with it? They can use personal information from social media (birthdays, pet names, important dates) to access other online accounts. They can create a fake identity to scam others. Your best defense? Keep personal data private. Avoid photos that reveal where you live or work, and be mindful of metadata, which can divulge where and when a picture was taken. Maintain strict privacy settings so you control who see your profile. Finally, consider identity theft protection that monitors social media.”

As authors we have to have a social media presence to garner reader attention. When does sharing too much information make you vulnerable and put your security at risk?