When History Meets Your Story 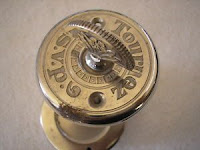 It was a simple enough scene: a woman visiting her sister. She takes the train, then walks the few blocks to her sister’s house, climbs the steps, and rings the doorbell.

And that’s when Google becomes a historical author’s best friend. After way too many rabbit trails and Reddit holes, I learned that yes, people had doorbells in 1922. Not everybody, but some. Not most, but a few. And just like that, a tiny bit of doorbell trivia made this character come alive. Of course, she had a doorbell, because she always wanted everything that “better” people had. She loved the sound of the chiming bell in her hallway and loved even more knowing that all her other poor friends heard only knocking.

Those of us who weave our tales in the past are subject to rules that authors in other genres can skip. Contemporary stories aren’t likely to slip in a technology that doesn’t exist; science fiction and fantasy writers can pretty much invent as they go along. But give a character a wristwatch before wristwatches were an expected accessory? That’ll get you a two-star review on Amazon (true story).

But sometimes—rarely, and for a very good reason—a writer just must give history a nudge. My new novel, The Seamstress (Tyndale), takes place at the cusp of the French Revolution, and I desperately wanted my rebel Marcel to wear the iconic red cap. The only problem? I couldn’t find a source that would place that cap on anybody’s head during the years in which my story was set. Was I going to let a little thing like historical fact get in the way of Marcel’s rebellious spirit? No. Marcel got his cap, and I addressed it with a quick mea culpa in the author’s note, lest the same reviewer who gave me two stars for a wristwatch proved to be an expert in all historical accessorizing.

Beyond matters of technology and costume, however, looms the responsibility of accurately depicting the people of history. I’ve had lots of cameos in my novels: Brigham Young, Aimee Semple McPherson, Lottie Moon, Martin Luther. Admittedly, in Loving Luther, Martin has a slightly bigger role, but I approached that project with a purposeful focus on Katharina. Why? Because Luther’s life is documented to the core, and Katharina has little more than a bullet list on Wikipedia. I could play with her life a little, staying true to the years and playing loose with the moments.

Breathing fictional life into a historical character, for me, is a matter of taking what is known about a person and giving it a manifestation within your narrative. For example, it is known that Marie Antoinette, who lives as a minor character in The Seamstress, spoke French imperfectly. (This, according to her detractors, who might have had a bit of a bias.) It was also known that she wasn’t exactly thrilled with her life with Louis.

So, I ran with that. I had her lapse into her native language during those moments when she was out of the public eye. I made her accent more pronounced during moments of high emotion. When she wrote, she had misspelled words and an awkward, forced hand. No big trick there. Then I read in a book dedicated to her fashion that she was not allowed to ever wear black and yellow together, as those were the colors of her Austrian family crest. I admit to running with this a little. In my story, when the rebellion was in full force, Marie Antoinette instructs her seamstress (The Seamstress, Renée) to add tiny touches of yellow and black to her gowns, stockings, shoes, hats.

Now, did the real queen ever do this? To this question, I respond: show me that she didn’t. And no. That didn’t get a line in my author’s note. The important thing is, I don’t have Marie Antoinette doing anything outside of her character. Because, really, all our choices must come down to what brings life to the character on the page.

Allison Pittman, author of more than a dozen critically acclaimed novels, is a three-time Christy finalist—twice for her Sister Wife series and once for All for a Story from her take on the Roaring Twenties. She lives in San Antonio, Texas, blissfully sharing an empty nest with her husband, Mike. AUTHOR LINKS: https://www.allisonkpittman.com/
https://www.facebook.com/Allison-Pittman-Author-Page-121203897897741/?ref=bookmarks
https://twitter.com/allisonkpittman https://www.instagram.com/allisonkpittman/
https://www.tyndale.com/p/the-seamstress/9781414390468

Email ThisBlogThis!Share to TwitterShare to FacebookShare to Pinterest
Labels: All for a Story, Allison Pirrman, Christy Finalist, Sister Wife series, The Seamstress, When History Meets Your Story