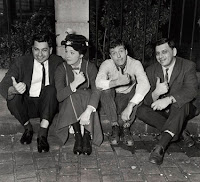 Richard M. Sherman and his brother Robert B. Sherman may not be household names, but the story songs they wrote are beloved worldwide via Walt Disney films and parks, including what they considered their crowning glory, Mary Poppins. Along with their Oscar-winning score, the were key players in developing the story structure.

Last Tuesday, June 12th, was Richard M. Sherman's 90th birthday. In his honor, here are eight things all writers can learn from the prolific songwriting team Walt himself affectionately referred to as "the boys".

COMBINE USEABLE IDEAS
There are eight books in the Mary Poppins series. Scenes and concepts from different books were brought together to create a storyline for the classic 1964 screenplay. Are there any ideas you've  put aside that could find a new home in your latest work?

FIND THE STORY
The magical English nanny had many colorful adventures, but Richard & Robert determined that these episodes had no character arcs and weren't enough to carry a story. They convinced Disney that Mary's employers should be distracted parents who rediscover the joy of childhood along with their children. Once a moral was chosen, the adventures took on a common purpose.

COME UP WITH A NEW TWIST
For Mary's signature song, the wanted to give her a clever proverb, like "An apple a day..." or "A stitch in time..."  The end result ("A spoonful of sugar helps the medicine go down") was inspired by Robert's young son, whose school had administered a polio vaccine placed on sugar cubes for easier consumption. You never know what phrase you write could become an instant classic.

SECONDARY CHARACTERS ARE PEOPLE TOO
In the books, Bert was only a minor character, a street artist known as The Match Man. He has much more prominence in the film, and his role as a chimney sweep was borrowed from a different character in the P.L. Travers series. Bert was given a presence and personality strong enough to be a companion for Mary Poppins. His equally charismatic signature song, "Chim Chim Chiree", won the 1965 Oscar for Best Original Song.

PICK THE RIGHT TIME PERIOD
The moved the story from the depression-era 1930s to the more hopeful turn of the century. Setting the story in 1910 also allowed them to develop one character into a suffragette. Speaking of whom...

RISE TO THE CENGE
Actress Glynnis Johns thought she had been cast to get the title role of Mary Poppins, only to learn that Julie Andrews had already been enlisted to play the title role. Walt appeased her by assuring her that the had written an especially great song just for her to sing. In truth, it wasn't even a thought up to that point. But Richard and Robert picked up the gauntlet and delivered a big and brassy number to give her lesser character a chance to shine. 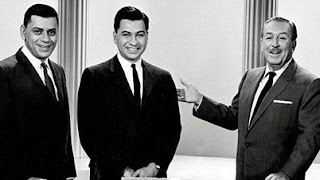 SAVE SOME THINGS FOR A RAINY DAY
The wrote 32 songs for possible inclusion in Mary Poppins, but only 14 were used when Walt declared the rest "unnecessary" for the story. Some were repurposed in later Disney features including Bedknobs and Broomsticks and The Jungle Book.

CLOSE THE DOOR
The brothers avoided distractions like the plague. When it was time to write, they shut out the world around them to concentrate on the project at hand.

In everything they wrote, Richard and Robert believed that story always comes first. By adopting that same focus, we can give our writing a little extra magic that is practically perfect in every way.