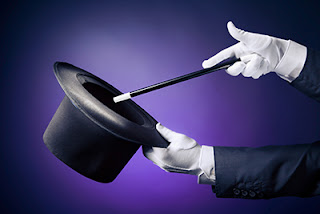 Little kids just don't get magic.
That's something I heard a magician say a long time ago, and it makes perfect sense.  At that young age, children have yet to differentiate the natural world from the supernatural world.  Taking things at face value, the incongruity of a rabbit suddenly appearing from a hat is beyond their scope. They're more interested in the rabbit itself.
I got a first-hand taste of this years ago doing the one magic trick I know.  Actually, it's not even magic, and it's barely a trick.  Using the most elementary of skills, I can make it look like I've removed my thumb from one hand while it wiggles in the other.  I haven't fooled any adults with it, and older kids typically groan at its lameness.  But I'll never forget the reaction of a kindergartener who ran off screaming, terrified that I took off a finger.  Thank goodness I didn't saw someone in half.

As we know, children have a simpler view of the world than adults.  We wouldn't be likely to write a scene with a couple of seven-year-olds discussing quantum physics or amortization schedules. But we may be less aware of the distinctive degrees of development our adult characters can also express.

With each stage in life, people's wants and needs change. Behaviorists have given us some insights we can take advantage of if we really want to get into the heads of our characters.

One particularly detailed guide is by Richard Barrett ("The Seven Stages of Psychological Development", found at http://bit.ly/2sViwO6   It's heady stuff but eye-opening and worth a look.  Here's an oversimplification:

EIGHT TO 24 YEARS
Respect and recognition, displaying looks or talent to become part of a group

25 TO 39 YEARS
Individuating, becoming oneself through expressing values and autonomy

40 TO 49 YEARS
Self-actualizing, becoming oneself through expressing gifts and talents

50 TO 59 YEARS
Integrating, collaborating with others and making a difference

These won't apply to everyone — or every character — but could any of these underlying needs add an extra dimension to your protagonists and those they encounter?  Perhaps your 55-year-old shop owner who does sleuthing on the side is also the president of a civics organization — an ideal way to introduce an entire cast of red herrings.

Knowing each character's stage of development is handy for giving them individuality. Researching their motivations in depth can also help you rely less on cliches and find layers to their personality that might surprise and dazzle you. 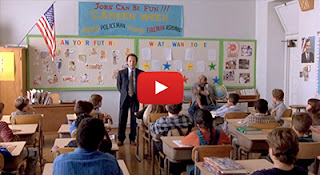 Fill their heads with age-appropriate thoughts and you will avoid a failure to communicate like that of Billy Crystal's character in City Slickers, whose Career Day speech for his son's class became the victim of a midlife crisis.
https://youtu.be/ZXXsX6144uI