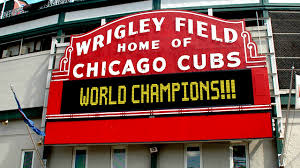 So, as I am writing this I am watching game seven of the World Series with the sound off. No, I am not a huge baseball fan but I am a huge fan of long shots, underdogs and lost causes so, naturally, I am rooting for the Cubs. The game has been awesome. The Cubs all but had it sewn up in the 7th with a three run lead until the Indians broke out the bad boys and now the game is tied as they head in for the tenth inning. But wait! Hold your breath a little longer. As if by some big-budget blockbuster director's cue, let there be rain! They are rolling the tarps out. Game delay.  Ain't that just a kicker? Adding insult to injury, a little notice pops up on my screen telling me my television has to change the channel in order to record my favorite shows coming on now.

“Ahhhh!” She shouts, shaking a fist towards the heavens.

If you wrote this stuff, no one would believe it for a moment. It's just too much. Too over the top. The rain delay is simply pushing the envelope too far. It's the Cubs for pity's sake!  If you were writing this you would have lost the audience at “the Cubs”.  Over one hundred years tells us the implausibility of the scenario, right?

In the pause I took from writing this article to watch history being made, it took on a whole new luster. As important as the finished product is, the true journey starts at the first pitch. For us writers, the first sentence. Write it. Who cares if you don't know exactly where you story is going to go straight away. Just like the 108 years it took for the Cubs to get here, it may take fifty re-writes, a decade or two. The pages may never see the light of day, but that's not the point. With every letter we write, we learn, grow, and evolve. That, my friends, is the journey. Don't be in such a rush to get from point A to point Z. Enjoy each key-stroke, or swipe of the pen. Own it and relish it because once you put down that last period, it's a whole new ball game. Some will make it to the big leagues, while others will have to be content with a career in the minors. That's okay! The critical part is that each swing, each font, are creations from your own heart and soul. Don't take that for granted.

For organic writers, like me, the bases are not neatly spaced in perfect diamond symmetry from the start. The creative process is not in any way linear or mapped out like it is for many writers. I tried that once and it was disastrous. For me, my story process is about as organic as the Amazon rain forest. It's easy to lose sight of the forest through the trees and vines while trying to reach the clear objective. That gut wrenching, tear jerking or awe inspiring end to our story.

When I begin, I am just as guilty as anyone of getting too wrapped up planning a clear path from A to Z. Which is why I felt it was important to write this. Don't be in such a rush to get to the business end of the road. The creative process is a soul feeding experience that we need to enjoy. Be in the moment as it's happening! Because once that final chapter is finished, that experience is over. The lights in the stadium go out and we all go home. For a non-sports related metaphor, let me try this one. The first kiss only happens once. Can you remember what you wore that day? How you felt leading up to it? As cliche as it sounds, the journey is just as important as the destination.

When I headed for a rarely used room to watch the final moments of the World Series on another television, it was then that this article became more profound to me. The camera panned across the faces of the fans gnashing at their fingernails, gazes rapt on the field, praying, waiting for that last out to define history, I saw him. A sweet old man dressed in a three piece suit that looked like he had been wearing it since the last time the Cubs won in 1908. This aged cherubic face stood among the hoard proudly holding up a ratty piece of cardboard. The homemade banner bore the words “It's Happening” scrawled in childlike block letters. His eyes were wide and you could clearly see he was holding his breath. Montgomery made the pitch. Martinez took the hit, the ball stuttered down the infield. Bryant scooped it up and passed it to Rizzo. That was it. The third out. It was over and as the realization washed over the players and they all converge on one another for hugs and chest bumps. But all I could see was the sweet old man in the background. Frantically messing with his cardboard sign. Then he raised it to the heavens as tears poured down from his eyes and it looked like his cheeks might explode, his smile was so enormous. 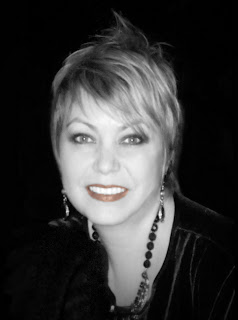 Mell Corcoran is author of the critically acclaimed Series of Shadows, including Shadows of Doubt. Shadows of Deceit, and Shadows May Fall. After nearly two decades working in the legal profession Mell made a major career shift to pursue her passion and found her bliss as a mystery-thriller writer. A native Southern Californian, Mell is an avid animal lover, hockey fan, would-be golfer and aspiring tech geek. She resides with her family just outside Los Angeles. Mell adores her fans and loves speaking at venues from the Annual International Thriller Writer's Convention, known as ThrillerFest, to local libraries and even small neighborhood book clubs across the country. Mell is extremely active in social media and can be found on Facebook and Twitter among others. Her books can be found on Amazon, Barnes and Noble or wherever books are sold. You can visit her website at www.MellCorcoran.com for links and more information.