Methods for writing are as varied as the writers who use them. As it relates to fiction, there are those who outline and those who don’t. My action-adventures and mysteries are written for readers 8 and up. http://booksandboys.blogspot.com I never outline. How I go about the writing process comes from several decades of dramatic film, video, and television commercial productions.

The first thing that happens is a title will pop into my head. That title immediately suggests the main character’s strengths and weaknesses, the setting for the story, and a primary plot thread. This is how original stories used to appear as I told them to my children when they were small.

I grab a recorder and tell myself the story, much like I would make them up for my kids in the past. This part of the process gives me the beginning, middle, and end. Then, while writing my notes, all sorts of characters and situations appear as I go along. These notes are typed, placed in a file, and not consulted again until the first draft is finished. This preparation process removes any possibility of writer’s block. For me, writing the first draft of any story is like watching a feature film playing out right in front of my eyes because I never know what’s going to happen next, or who will show up.

I have a separate writing room where I can go, shut the door, and escape into a world of my own making. Props help me visualize each scene. While writing one manuscript, Forest of Fear, I filled a small cage with redwood chips, went out, and caught a chipmunk. Where I live, they run into our drainpipes when someone walks outside. I kept him on my desk for the day, but wasn’t finished with the sequence. Rather than keep him overnight, I let the little guy go. Then, the next morning, I went out and caught another one. Having him helped me picture the woods. 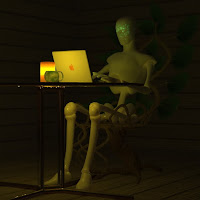 Also, while writing, I light a candle and keep it burning next to my computer screen. This helps me to focus on the task of writing. And, because of my film work, I play mood appropriate instrumental music in the background for each scene, setting the right mood in my mind, too.

I never read what’s already been written before the first draft is finished. Then that is put away for several days before I take it up again. In this way, it feels like reading something for the first time.

I’ve also written two nonfiction manuscripts. One, The Sense of Humor, required extensive research and outlining. http://yourhumorsense.blogspot.com The other is a true life story which included outlining of research material and dozens of interview transcripts. 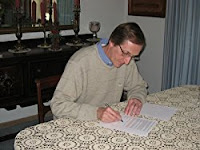 Max Elliot Anderson grew up as a struggling reader.  After surveying the market as an adult, he sensed the need for action-adventures and mysteries for readers 8 – 13, which would have interested him as a child. Using his extensive experience in the production of dramatic motion pictures, videos, and television commercials, Mr. Anderson brings that same visual excitement and heart-pounding action to the stories he writes. His books include different characters, setting, and plot as well as two traditional series. Several middle grade books are published, twenty-one more are under contract, with several additional manuscripts completed. Young readers have reported that reading one of his books is like actually being in an exciting movie. His Social Media links are: Middle grade fiction blog http://booksandboys.blogspot.com The Sense of Humor blog http://yourhumorsense.blogspot.com  Facebook https://www.facebook.com/max.e.anderson Twitter https://twitter.com/MaxEAnderson   LinkedIn https://www.linkedin.com/in/max-elliot-anderson-9130226?trk=hp-identity-name