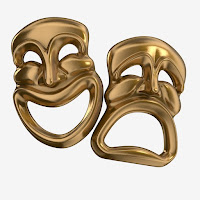 Perhaps you've heard of (or played) a game called "Fortunately/Unfortunately".  It's been around since the 80s, although I only learned of it recently. Apparently I travel in the wrong playgroups.

This verbal game requires nothing more than people to play it. You simply take turns making up a story, alternating sentences with the first words "fortunately" and "unfortunately".  For example:

It's a creative way to fill time, like on a long car ride.  It's also good exercise for both sides of the brain, since logic and imagination must work together in order to keep the game going.

But this concept has even greater possibilities for a writer.  Isn't "fortunately/unfortunately" the pattern followed by the classic stories?  For example:

The Wizard of Oz
(skipping ahead to the good parts:)

Following this pattern of "I have good news and bad news", the audience enjoys a roller coaster of ups and downs to keep things interesting.  And, as I elaborated on in a previous post, it's helpful if the writer knows how it's all going to end so that each scene furthers the plot in the proper direction.

It's not uncommon for a writer to insert several "unfortunatelys" between each "fortunately". Problem may pile upon problem before a reprieve temporarily breaks the tension.  This is especially common in a dark tale or an action drama.

And the "unfortunately" doesn't always have to be the direct antithesis to what comes before. It can be something completely unpredictable that turns everything on a dime. Who would have anticipated that a cyclone would interfere with Dorothy's running away from home?  Any roadblock to the overall goal can do the trick.

Just as when playing the game itself, allow your imagination to come up with fortunately/unfortunately scenarios spontaneously and without overthinking.  Let the muse do the work, and in no time at all you could have a working outline for your next novel.