Last week, Memphis, TN had record rainfall. In a 30 hour period of time, over 10" of raicaused the Wolf River to flood. Saturday afternoon, I drove around to view the flooded areas so I could take pictures. Little did I know it would turn into research for my "work in progress" book.

In my adventure, I met an impressive high school student drone operator who was shooting pictures from his drone vantage point. His smart phone acts as the remote control of the drone. He showed me how it worked and proudly advised that he had saved his money for the drone. He uploads the photos to his website with links to Facebook. His drone footage of the flooding is also on YouTube. He said his flood pictures were to be shown on a major network news show over the weekend.

We talked about the area we were in that included a strip shopping center. I had read about the evacuation in The Commercial Appeal newspaper. The shopping center had been evacuated the day before because authorities thought rain soaked soil caused multiple methane gas leaks bubbling through breaks in the ground. The strip shopping center sits over an old landfill. Although the area is equipped with equipment to allow gas from the decaying landfill to escape, the huge amount of rain apparently concentrated the gas in the soil. It forced the gas out at toxic levels. Leaks were bubbling up in foam-like swirls across the area, through cracks in floors and in the areas buildings. 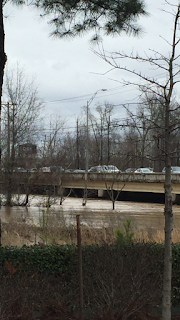 The drone owner left the area because power lines were interfering with him being able to communicate with his drone. I was all the richer for meeting this knowledgeable student. His lessons about how the drone operated were invaluable hand on research for my "work in progress."

I highly recommend taking advantage of unusual events. Get out of your chair and take a mini field trip. When you run across people, be open with them. Ask questions and sit back. Soak in the information you learn. My little Saturday adventure equated into a chapter in my book and possibly will play a part in the book's ending.

What about you? Do you have life experiences found their way into your stories?