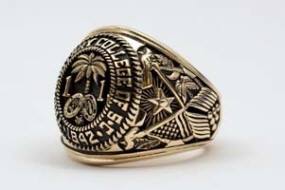 Southern writer Pat Conroy, the author of such great works as The Boo, The Water is Wide, The Great Santini, The Lords of Discipline and The Prince of Tides, passed away on March 4th. Conroy had been a Marine Brat living in various places but after the age of 15 spent most of his life in his beloved Beaufort, South Carolina. There he grew to love South Carolina; it’s people, food and beauty and reflected his love in his writings.

In his writings Conroy also reflected his troubled childhood. The Great Santini was a reflection of his childhood with an abusive military father. In the movie depicting the book Robert Duvall brought the part of the father to life so well it was frightening. In The Lords of Discipline, his 1980 account of life at a southern military school was enough to cause a split with him and his alma mater The Citadel. It was over 20 years later that the relationship was finely mended and Conroy was asked to return to give the 2001 Commencement speech. He stated that he had thought Saddam Hussein or Jane Fonda had a better chance to deliver the address.

The State newspaper published an article titled, State of Surprise: Pat Conroy’s love letter to South Carolina. It would do every writer well to read this and think on what drove Conroy in his writings. We too would do well to learn our surroundings, its people and history. Conroy in a 1988 interview with CBS said, “I always felt that if I told a story of the South I’d tell the history of the whole world. If I could figure out the South, figure out what is glorious about it, figure out what is hideous about it, if I could get it down if I can get it right, I would tell the story of the entire human race.” 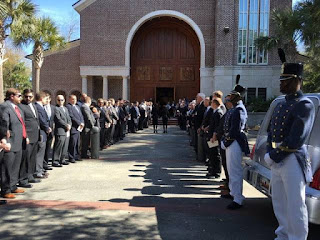 During the 2001 Commencement speech to graduating class at the Citadel Conroy said the following:
“IN 1979, THE YEAR MOST OF Y’ALL WERE BORN, I WAS FINISHING UP “THE LORDS OF DISCIPLINE,” AND I TRIED TO THINK OF A LINE OR WORDS THAT WOULD SUM UP BETTER THAN ANYTHING HOW I FELT AND HOW OTHER PEOPLE FEEL ABOUT THIS COLLEGE. I WANTED IT TO BE SOMETHING RINGING AND AFFIRMATIVE, SOMETHING TRUE, SOMETHING TO BE TRUE FOR EVERY PERSON WHO HAS EVER GONE THROUGH THE LONG GRAY LINE. I CAME UP WITH THIS LINE, "I WEAR THE RIng.””

On Tuesday March 8, 2016, Conroy’s funeral was held at St. Peter’s Catholic Church on Lady’s Island. Flags in Beaufort were at half-staff honoring their "Prince." Members of The Citadel’s Class of 2001 traveled to the funeral service. They were personally invited by Conroy when he spoke to them at their Commencement. He told them to show the usher the date on their class rings and say “I wear the ring.”
His writing secures his legacy for future readers. What are your favorite Pat Conroy books and why?

Email ThisBlogThis!Share to TwitterShare to FacebookShare to Pinterest
Labels: 1945-2016 “I wear the ring”, Doyne Phillips, Managing Editor for Southern Writers Magazine, Pat Conroy, The Boo, The Great Santini, The Lords of Discipline, The Prince of Tides, The Water is Wide