You may have heard the expression "Putting the fun in dysfunctional."  It's a phrase that's been around for years and shows up from time to time.  I'm proud to announce (trumpet fanfare) that I came up with that very slogan. Yes, it's true. The only thing is, so did a thousand other people.  It seemed original to me when I first thought it up, but within a short time I was hearing it on TV and reading it in magazines.  Apparently it was a phrase whose time had come, and obviously not just to me.

I had a similar experience this very weekend, recalling the children's chant "I scream, you scream, we all scream for ice cream."  (Full disclosure: I have never actually screamed for ice cream, but I've come close over a Chocolate Stampede at Longhorn.)  Anyway, it occurred to me that I Scream, You Scream would make a perfectly clever title for a novel. Out of curiosity, I checked to see if any books by that title already exist.

Well, fine.  I wasn't planning on writing that book anyway.  But it got me wondering whether some other well-known phrases that might make a catchy book title are readily available. How about "In your dreams"?

Strike two.  Apparently my muse gets around.  Not to be defeated, let's try again with a different phrase, maybe even something a little positive like "It's nothing personal."

Alright, I'm ready to say nasty things about my muse, but not out loud, because she's elusive enough as it is.

Maybe a different approach altogether is in order.  Surely a song title like "Can't Buy Me Love" hasn't been turned into multiple books. 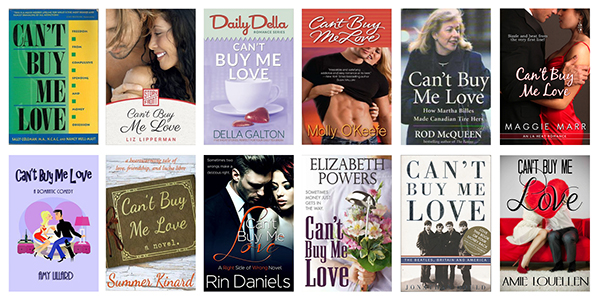 By now you get the point.  You could spend a hard day's night going down that long and winding road, trying to come up with a common phrase that hasn't already been taken.  Rather than risk getting lost in the shuffle, you may be better off creating a title that's never been done before. The more original, the more memorable, such as How Come Boys Get to Keep Their Noses?  (Yes, that's actually a book.)

Not to suggest that there isn't value in borrowing a phrase that's already in the public consciousness, since the familiarity factor could pay off in extra recognition for your novel.  But if someone else should use the same title, remember ... it's nothing personal.