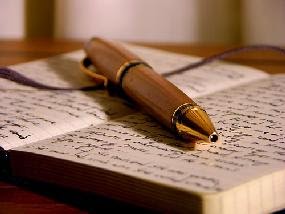 I have been writing since I was a child. I wrote my first short story, about a little leaguer hitting a home run, at the age of seven. My parents encouraged me to write, even helping by paying out of their meager income to let me take a correspondence course on writing. That was in the late '60s, and I have never lost the love of the written word. Perhaps that is why I prefer the pen and paper – the connection to my youth. I'm sure a psychologist would have a field day with that.

I find it more satisfying to write longhand than directly on the keyboard. I thought for a long time that I was the odd man out when it came to this, but recently discovered that many writers also prefer the immediacy and intimate connection of longhand to the relatively impersonal feeling of the machine.

Beside a love of the written word, I have a deep respect for those who mastered its use. My writing is influenced heavily by writers of the first half of the twentieth century: men and women who conveyed ideas of the fantastic and wonderful through a well-turned phrase or picturesque description. In a time when only books, and perhaps radio, titillated the imagination, the written word was the vehicle for transmission of ideas. Writers were artisans, masters, and marketeers of mankind's past, present, and future. They reached directly into the human psyche and tickled it into invention and innovation in ways television cannot, because the images and sounds and stories it shows are fleeting, ephemeral phantasms that pass from consciousness with the next commercial break. 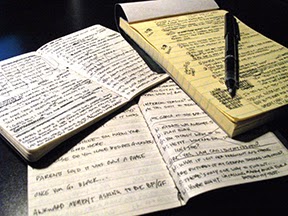 Willfully and with purpose, I try to continue that tradition. In my writing I try to evoke emotion from the reader. I attempt to make my characters likable or hateful, deeply conflicted or heroic, beings of what some might call stereotype simply because those are the iconic images that prick our subconscious into reaction. As a result, I have received reviews that range from pan to rave, all of which are valid and which I welcome as judgments as to the effectiveness of my intent. My fiction I write in longhand so I might more closely connect to its spirit. All writers put something of themselves in their work, but if I cannot feel the flow of the pen, the resistance of the paper to the nib, see the curve of the letters as they appear, I don't identify with it as mine. And if I can't identify with it, I feel my reader will have the same problem.

H. David Blalock was born in San Antonio, Texas, David spent the majority of his formative years in Jacksonville, Florida. At the age of 16, his family moved to the Panama Canal Zone where David finished school and entered employment with the Department of Defense as a Powerhouse Electrician. Hiring into the FAA, he returned with his wife and two daughters to the States and settled briefly in Gulfport, MS. A few years later, he moved to Memphis, TN, as an Air Traffic Controller for the Memphis ARTCC. There he remained until his retirement. David's writing has appeared in numerous anthologies, magazines, webzines, and writer's sites. His work continues to appear on a regular basis through multiple publishing houses, including Doom Angel, Traitor Angel, and Angelkiller. He can be contacted via Personal Blog -- http://hdavidblalock.blogspot.com Facebook  https://www.facebook.com/Writer.HDavidBlalock Twitter -- @HDavidBlalock