When George Bailey decides to drown himself in It's a Wonderful Life, he ends up saving someone else from drowning instead.  Over the course of the story, George realizes his life isn't worthless after all, but rather has had positive impact on everyone around him.  Irony such as this adds a touch of magic to fiction; a poetic twist of fate that makes it bigger than life. 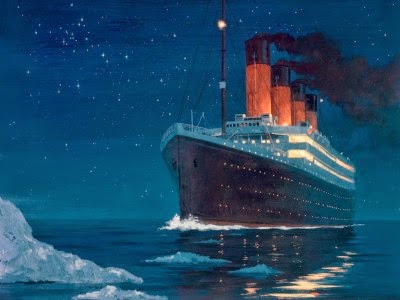 In truth, life itself is full of ironies, so we identify with this fictional device. Ever since Greek tragedies, storytellers have sought to heighten the drama by pitting characters and situations against themselves.

There's enough irony in Titanic to sink a ship. The rich girl doesn't want her rich suitor; she loves the poor immigrant boy. Many on board were looking to start a new life, only to have no future at all. There were too few lifeboats available because something like this was never going to happen, much less on the maiden voyage.

In The Wizard of Oz, everyone puts their hope in a wizard who isn't a wizard at all. Dorothy, who runs away from home, only wants to go back home.  Her traveling companions long for a brain, a heart, and courage, when it turns out they had them all along.

More recently, The Fault in Our Stars features a character who likes to keep a cigarette in his mouth but never lights up, in metaphorical defiance against the cancer causer.

There is irony in a flawed protagonist.  All super heroes and detectives have at least one serious Achilles heel.  To makes matters worse, costumed crusaders from Spiderman to Zorro can't reveal their secret identity to the people they love most, and are often blamed for something they didn't do.

Contrast is a particularly popular form of irony.  A messy roommate drives neatnik Felix Unger to distraction in Neil Simon's The Odd Couple.  Even Sesame Street's Bert and Ernie were a pint-sized pair of opposites.  From The King and I to My Fair Lady to Downton Abbey, there is fascination in seeing different cultures and classes clash. 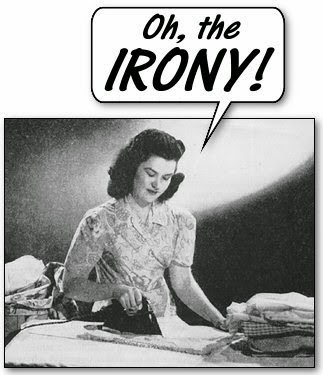 How many romances start out with the two lovers despising each other?  (Besides all of them?)  Indeed, we wouldn't be quite as interested if it was love at first sight and remained smooth sailing through the tunnel of love.

Similarity can be just as ironic as contrast.  We see it in a child who takes on the negative characteristics of a parent, or a sidekick who comes to the rescue by using a skill the hero taught them.

The very jokes we tell make us laugh through irony.  We are surprised by the punchline because we were expecting something else.  Why did the duck cross the road?  Because it was the chicken's day off.

Irony comes in many different forms, and creates interest instantly. We can give a story more layers and more complexity with the simple addition of this very easy device.  How ironic is that?

Email ThisBlogThis!Share to TwitterShare to FacebookShare to Pinterest
Labels: creative fiction writing, Gary Fearon, irony, It's A Wonderful Life, Southern Writers Magazine, The Fault in Our Stars, The Wizard of Oz, Titanic