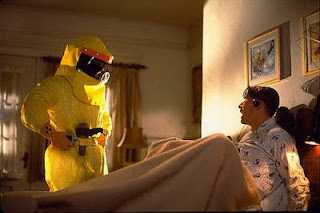 There's a scene in Back to the Future in which Marty McFly dons a hazmat suit and tries to trick his father into thinking he's from outer space.  To support the ruse, Marty uses his Walkman like a weapon to inflict hard rock on this 1950s fellow, whose musical awareness has only gotten as far as "Earth Angel." When the dad is introduced to heavy metal, he thinks his brain is melting.  (I often feel that way too, and I've heard it before.)

It's a funny movie scene, but it evokes a stimulating consideration about the evolution of music, and for that matter, creativity in general.  What would be Mozart's first impression if he was transported 200 years into the future and experienced a sudden dose of Iron Maiden?  The possibility that his brain actually could melt aside, chances are he would interpret it as so out of his realm of consciousness that it isn't even a form of music.

By the same token, if we went back 1500 years and played Mozart to a group of medieval monks whose only exposure to music was vocal chants, they might well regard Wolfgang's classical concertos as the work of the devil.

As I watched Star Trek: Into Darkness last week, I had to wonder how someone like George Washington would react if he walked into a 2013 theatre unawares, and donned 3D glasses.  The convincing CGI spectacles of planets exploding and warp speed travel through the stars would appear all too real and life-threatening, and another brain might melt.

We've indeed progressed in mind-numbing ways from the very first evidence of entertainment on the big screen, namely cave paintings.  Some say cavemen were the first storytellers; others say these early drawings were a form of communication. All I know is, people were a lot skinnier then.

Whatever the case, whether we're talking movies, music or writing, what we create today comes from a long, gradual, and natural evolution of creativity.  Jules Verne imagined a future that, in some respects, we've already surpassed.  Dick Tracy's video wristwatch from the 50s took only a couple of generations to become reality.

What we imagine — and chronicle — in any lifetime becomes an important stepping stone in the future of mankind and culture.  As writers, we play a vital role in history, right where we are, right now.  I think that's kind of exciting.  I'm tired just thinking about it.

Marty McFly knew that each generation has its own voice, and that too much of a jump forward can be a jolt. Therefore, there's a lot to be said for all the parents who don't start their babies out on rock 'n roll, and instead buy their infants those "Classical Baby" CDs, said to give kids a smart start.

After all, we need to crawl before we can rock.