If you like to analyze creative storytelling, and are a fan of Southern satirical comedy that is regrettably and tragically true, run to your local theatre before the movie Bernie has come and gone. Bless his little heart. 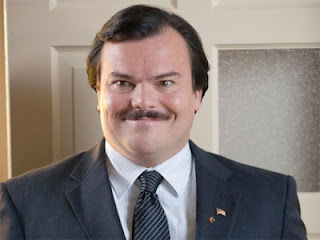 During the opening scene, Jack Black plays beloved Bernie and is seen driving through town waving and greeting everyone, while singing a gospel hymn at the top of his lungs. Shirley MacLaine plays the meanest woman in town (think Old Man Potter in the Christmas classic It's a Wonderful Life). This story has it all: a rural, dying, once oil boom town of Carthage, TX, a horrendous crime, family and friend greed, and courtroom scenes with the tension of a verdict.

There is also a would-be hero, a district attorney played by cutie Matthew McConaughey.  His character through the townspeople’s perceptions and feelings is portrayed almost villain-like, even though he is the seeker of justice for the victim. Poor old Matthew’s character, Danny Buck Davidson, never called “Danny” or “Buck” but always “Danny Buck”, has an obvious streak of dramatics fueled by political ambitions.
Matthew McConaughey's real life mom, K-Mac, is Tassie, one of the quirky townsfolk. The laugh out loud moments come while the locals tell their views on events as the story unfolds, with unspoken questions answered by their flavorful and candid responses, witticisms voiced as only true Southerners speak. Some memorable movie quotes are as follows: "I'm not fond of cremations, I just don't like the idea of someone spending eternity in something the size of a motel ice bucket;" "it's like he cast a spell over the entire area;" "she used to tear up my toys, she'd pull the heads off my dolls” and Bernie responds, “well there's some goodness in there, too;" "there are people in town that would have shot her for five dollars;" "frozen like a popsicle;" "counting-cousin rednecks with more tattoos than teeth;" and the revered Southern phrase "that dog don't hunt". 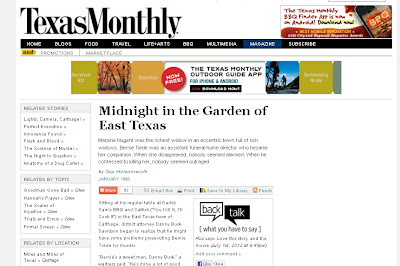 This kaleidoscope of a movie has something for everyone and started out simply as an article for Texas Monthly entitled “Midnight in the Garden of East Texas” written by co-screenwriter Skip Hollandsworth. Are you paying attention, writers? A mere article in a state publication based on a true crime with real people became a bona fide movie starring award-winning actors and actresses. The writer of the article had his writing career change from article writer to co-screenwriter.


Never say, “I have no story ideas.” We are surrounded by stories. Unfortunately, in our society, true crime events occur everyday. Find one that interests you and write about it. Who knows, the movie makers could knock on your door one day; but you have to write the article or they for sure won't come. Pick up that pen, put pen to paper and "bless your little heart," start that article.


Have you gotten your free online copy of Southern Writers' anniversary issue yet? Get it now! http://www.southernwritersmagazine.com/july-gift.html