(For the last couple of weeks, Suite T has been sharing different ways in which Southern Writers Magazine is dedicated to helping authors. Today we're proud to spotlight a special group of authors who also believe in supporting a very good cause. Here's guest blogger Jeffrey "Hammerhead" Philips:

It started with a simple request.
Non-fiction author Steven Kerry Brown, my friend and fellow blogger at www.handcuffedtotheocean.com, has been fighting Leukemia for two years. A few weeks ago, he asked if I would send an e-mail out to the Mystery Writers of America (MWA), Florida chapter. He wanted to notify his fellow members that his chemo was no longer effective, and that he had decided to enter Shands Cancer Hospital for a Bone Marrow Transplant (BMT).

That was the bad news. Almost as discouraging, however, was the fact that the cost of the program would exceed $500,000.00, all of which would be coming out of Steve’s own pocket, as he no longer had health insurance. And so, reluctantly, Steve decided he needed to ask for help. He set up an online fund seeking donations to help offset some of that treatment cost and asked me to spread the word in hopes that some of his fellow writers might be able to spare a few dollars.
The e-mail was sent. The next Saturday was the monthly MWA meeting, and our chapter president, Neil Plakcy, asked if I would say a few words about Steve’s condition. I was grateful for the opportunity. After my announcement, many members stood and said how helpful they found Steve’s book, “The Complete Idiot’s Guide to Private Investigating”, and how Steve (himself a well-known private investigator) had helped them with P.I. characters in their books. Many members were glad to donate to his fund, and several wanted to do even more. This is one fantastic group of people.
The next week I received e-mails from fellow writers asking the same question: how else can we help Steve? With the assistance of Neil and another MWA Florida board member, Diane Stuckart, an idea formed. What do authors like to do the most? Sell their books. And so we decided upon a one-day event where participating authors agreed to donate a portion of the proceeds of their sales of a particular title to Steve’s fund. It would be called “Sell Books for Steve Day”. But, who would spearhead this endeavor? Of course, I said I would.
Step one was to find authors willing to take part and give up their hard-won royalties for the cause. A request was sent to our MWA chapter’s authors. Many of whom, in turn, sent word about the event to other organizations.
In the next few days, fifteen generous authors from the MWA and Romance Writers of America volunteered for the event scheduled for Monday, July 16th. WOW, I love these people.
The next steps quickly fell into place. Book covers and story blurbs were collected, links to Amazon were created. The blog “Handcuffed” was updated with information about the event. Everyone announced the event on the social media networks and Tweets were sent. The love was felt. Steve is at a loss of words for his gratitude. And now, we’re waiting to see just how successful our efforts will prove to be.
Yes, sometimes a simple request grows into something more profound. Steve’s appeal sent me down a road where I found any number of people willing to help, wanting to do more. It does my heart good knowing so many are helping.
I want to thank Southern Writers Magazine for space and willingness to help this cause. I’m asking its readers to go to www.handcuffedtotheocean.com today, July 16th and review all the fine books (and in my opinion, the best authors in the world) being offered to raise money for Steve. Buy one, or two, or all fifteen knowing that a portion of your purchase (in some cases, up to 100%!) will go directly to Steve’s fund. 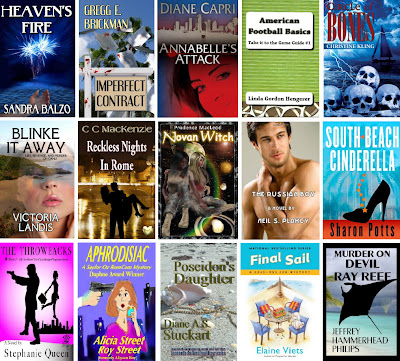 But remember, to count for this event, your purchase must be made today, July16. You also can donate directly to the BMT transplant fund any time you like at www.handcuffedtotheocean.com, where Steve is blogging about his treatment and progress. And even if you can’t buy a book or make a donation, spreading the word about this event will help Steve out as well.
_______________________________________

Jeffrey “Hammerhead” Philips strapped on a scuba cylinder (when Clorox bottles were BCD’s) for the first time in 1967. He dove for two years, decided he liked the water and obtained his scuba certification from NASDS, then became a PADI instructor. He hasn’t stopped diving since. In 1980 he married the prettiest mermaid in the ocean, Kitty. Today, he lives in West Palm Beach, Florida, writing fictionalized events of his travels.