Effects On Writing During Pandemic

Tom Threadgill is back with another riveting page-turner featuring Amara Alvarez, the detective, who is willing to put everything on the line to see that justice is served and lives are protected. This is book 2 in the series. 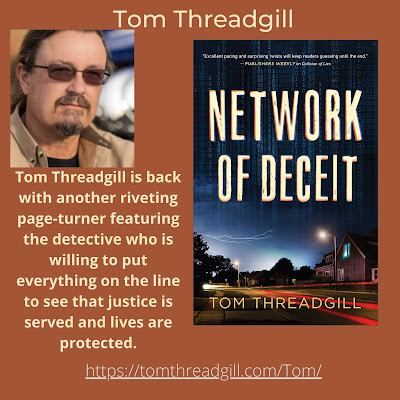 Here is Threadgill’s response to questions regarding his writing experience and effects of the pandemic.


How have you set your goals for writing for the new year?
Unlike prior years, my writing goals for 2021 are still in flux. So many things happened in 2020 that affected my work, mostly on a personal level but also professionally to a lesser extent. I usually try to write one book per year but that didn’t happen last year. I did finish edits on Network of Deceit and did some early plotting on a possible sequel, but as it stands right now, I’m not sure what 2021 has in store for my writing. I do know there are more stories to be told in the Amara Alvarez series, and I hope to tell them soon.


How has the virus affected your writing?

I think the main effect has been the reluctance to write due to the overall sense of foreboding that seems to permeate everything. The gloom that settled over the U.S. (and the rest of the world), enhanced by the media and politics, took my introvert personality to new levels. It’s exhausting to read and hear nothing but bad news constantly, which is why I tuned out of the news and most social media early in the year. Writing is a job that requires creativity, endurance, and tons of effort. The impacts of the virus, particularly in my personal life, redirected a lot of my energy away from my books.

Do you feel the pandemic has changed your writing in some way?
Absolutely. My books have a touch of grittiness to them. Sometimes more than that, but not much. I’ve always tried to keep my writing as realistic as possible, which means that HEA (happily-ever-after) doesn’t always work out. I do understand readers want to be entertained and that includes an ending that is upbeat, or at least hopeful. That won’t change but I do feel that future books are going to be a bit darker with more edge to them. I’m in the process of formulating a new series that plays into that. Real people forced to make “the lesser of two evils” decisions and deal with those consequences.


Where did you get the idea for your new book, Network of Deceit?
I’ve had the setting of the crime in my mind for years. While on a road trip with my wife, we drove past an abandoned water park in the middle of winter. Her first thought was how spooky it looked. Mine was what a great place that would be to hide bodies. I suppose that’s the difference between fiction writers and normal folks? The rest of the plot came together as I wrote. The main character, Amara, must figure out what happened to a teenage boy and why, if he was murdered, anyone would choose to commit the crime in the middle of a sweltering hot day at a crowded location like a water park. Along the way, things get worse when her personal electronic devices are used against her. That plays into my belief that none of us truly understand the privacy we’ve given away to companies who profit from that information.


What was the easiest and most difficult part writing your new book?

The easiest part is writing the first chapter. I almost always have a good idea of how I want the opening to go and what the hook will be. That doesn’t mean there’s not a slew of revisions that take place after that, but I’ll tweak the writing until it’s where I want it. That first chapter sets the tone for the rest of the story and starts asking questions that the main character – and the reader – have to answer. The most difficult part of the story is turning it over to the editor/publisher. Not because I don’t think it’s ready, but because it’s the first time the book will be seen by others. Every writer knows the feeling of letting their baby out into the world for the first time. The trepidation, fear, hope, and relief of finally being done.

What do you love most about reading suspense novels and writing them yourself?

For me, it’s all about the surprises. When a character does something unexpected but remains true to themselves. Nothing worse than when the story doesn’t feel real, like the detective who continually makes stupid decisions or the huge coincidence that saves the day. I’ll usually quit reading when that happens since I’m pulled out of the imaginary world.

Did anything surprise you as you were writing this story?

I’m always surprised when I write a novel. Usually it’s by something a character does that I didn’t see coming. That’s one reason I don’t plot. It allows me to have more of a flow to the story and let the characters tell me what they’re going to do. Yeah, I know that might sound odd, but it’s what happens. Kudos to those writers who can plot out their story from start to finish, but I’m not one of them.
What do you hope readers will gain from Network of Deceit?

Mostly, an escape from reality for a little while. I write to entertain. Nothing makes me happier than getting an email from a reader telling me they couldn’t put down my story.

Tom Threadgill turned his love of a good tale into a full-time profession. His books have a distinct focus on clean, suspenseful action with strong character development. He is a member of the International Thriller Writers (ITW) and American Christian Fiction Writers (ACFW). In his downtime, Tom enjoys woodworking, riding his Harley, and chasing the elusive Yard of the Month award. He currently resides with his wife in the Dallas area and can be reached through his website at TomThreadgill.com