Today is the Day to VOTE in the United States 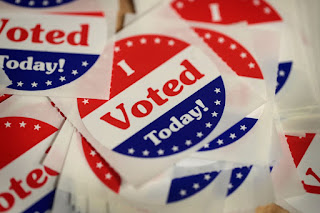 In the United States, today is mid-term Election Day. If you’re a registered voter please go and exercise your right to vote. If you’re not registered, please consider registering, so you can participate in future elections.

If you’d prefer to read a political thriller after voting, you might want to consider these classics found on the Verge website. “Politics are woven into the genre’s DNA. Many of the genre’s best novels contain astute political insights that not only analyzed the governments of their time, but have remained politically relevant decades after their original publication. One of the genre’s early works, for example helped set the stage for countless work of political commentary thinly concealed as sci-fi speculation. We, by Yevgeny Zamyatin, was first published in 1921. It follows D-503, a spacecraft engineer living in One State. The populace is carefully watched by the government to stave off any unrest or dissent amongst the people. It’s an intriguing, chilly novel that laid the groundwork for other great dystopian works, such as Aldous Huxley’s Brave New World, Kurt Vonnegut’s Player Piano, and George Orwell’s 1984.”

Another favorite is “Margaret Atwood also wrote her most famous novel out of concern over American politics. Disturbed by the right-wing rhetoric she was seeing in the early 1980s, she wrote The Handmaid’s Tale, incorporating her interest in books like Fahrenheit 451 and references to the United States’ Puritanical origins. ‘My rules for The Handmaid's Tale were simple,’ she noted in her essay collection In Other Worlds: SF and the Human Imagination. ‘I would not put into this book anything that humankind had not already done, somewhere, sometime or for which it did not already have the tools.’ The story is told by Ofred, a handmaid in the oppressive, patriarchal Republic of Gilead, which assigns fertile women to produce children for the nation’s ruling class. It sounds medieval, but this is a modern-day society that emerged from the ashes of our own.” The book has been turned into a television series on the Hulu channel.

We can also celebrate Election Day by going and leaving another author a “Vote” in the form of a well written review. It will encourage another author and make you feel good just like voting in this election.

What is your favorite political thriller?

Email ThisBlogThis!Share to TwitterShare to FacebookShare to Pinterest
Labels: Annette Cole Mastron, by Yevgeny Zamyatin, Communications Director for Southern Writers Magazine, Margaret Atwood, The Handmaid's Tale, Today is the Day to VOTE in the United States, We