Shakespeare and the Writer in Us All 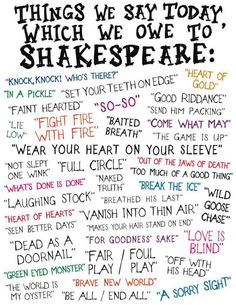 We all use phrases everyday from the words of William Shakespeare’s works. I’ll be honest. I have NEVER sat down and read the entire works of Shakespeare. Does that shock you? Or are you in the same boat? Of course, I’ve read some plays in their entirety for classes in school. However, I’ve decided to read Shakespeare’s plays with the start of the new year. It's amazing how an author who wrote plays over 400 years ago has such timely plots.

It’s amazing the influence this author/playwright has had on other authors. At this yNet link you can read about, “Shakespeare’s legacy is without parallel: His works translated into over 100 languages and studied by half the world’s schoolchildren. As one of his contemporaries, Ben Jonson, said: "‘Shakespeare is not of an age, but for all time.’ He lives today in our language, our culture and society – and through his enduring influence on education.”

Shakespeare Uncovered is a PBS (Public Broadcasting Service) series that "combines history, biography, iconic performances, new analysis, and the personal passions of its celebrated hosts to tell the stories behind some of Shakespeare’s greatest plays. The personal passion of hosts Hugh Bonneville, Christopher Plummer, Morgan Freeman, David Harewood, Kim Cattrall and Joseph Fiennes helps relay the stories behind some of William Shakespeare's greatest plays. Each episode combines interviews with actors, directors, and scholars, as well as visits to important locations, clips from film and television adaptations and excerpts from plays staged at Shakespeare's Globe Theatre in London. Works referenced in the series include "Hamlet," "A Midsummer Night's Dream," "King Lear," "The Taming of the Shrew," "Othello," "Antony and Cleopatra" and "Romeo and Juliet." The First episode date was June 19, 2012.” It's a fascinating series, I'll warn you now, it's addictive. 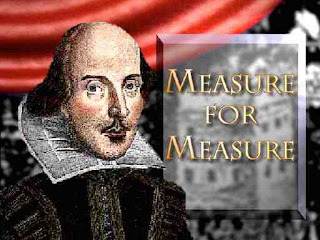 I found this series late. The first episode I saw was "Measure for Measure,” which offers a timely look at sexual morality, hypocrisy and harassment. Season 3, Episode number 3 with an air date of October 19, 2018. Shakespeare’s character, Isabel, may have been based on an aunt of Shakespeare, who was a nun. The episode goes to the various locations in England, such as Anne Hathaway’s home and The Globe Theater, where Shakespeare’s plays were first viewed. “At a time when the #MeToo Movement and stories of sexual harassment and abuse by those in power dominate headlines, you might be surprised to discover that Shakespeare addressed this very issue 400 years ago in his play ‘Measure for Measure.’ In these two videos from Shakespeare Uncovered, learn about this ‘problem play’ and how Shakespeare’s Isabelle faces similar challenges as victims today in terms of consent and credibility, for ‘Who will believe thee, Isabelle?’ Support materials engage students with contemporary connections through discussion questions and a background essay tying the #MeToo Movement to the world of Shakespeare. Shakespeare Uncovered combines history, biography, iconic performances, new analysis, and the personal passions of its celebrated hosts to tell the stories behind the stories of Shakespeare’s greatest plays. To learn more and view full episodes, visit the Shakespeare Uncovered website and collection page.’”
Who will believe thee, Isabel? How about you, have you read all of Shakespeare’s plays? Want to join me in reading Shakespeare in 2019?

Email ThisBlogThis!Share to TwitterShare to FacebookShare to Pinterest
Labels: Annette Cole Mastron, Communications Director for Southern Writers Magazine, Measure for Measure, Shakespeare and the Writer in Us All, Shakespeare Uncovered