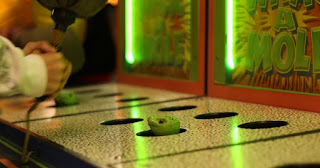 As a psychology major at the University of Iowa in the early 1970s, I was talked into taking a writing class taught by a visiting author who had a hot, new book out. The class became a small group of guys and me, lone female, sitting around a table. They were writers. I was the mole who silently sat there and took it all in.

I wasn’t a great student at the time and I missed a few classes, including the one where one of the “guys” wore a pig mask. He didn’t have it on when we finally met up for the next writing class. It wasn’t necessary, I could tell by his reading that the macho gauntlet had been slammed down. It was up to this shy person to speak up for women. I did my best to point out the sexual myths embodied in his overdrawn parody of the MASH movie. Don’t think I scored any points, but I had to try.

The teacher gave us all top grades. I was totally undeserving of an A. The sad thing was I couldn’t remember his name. The teacher, not pig-man. It’s bothered me for years. Until my morning of miracles.

That’s when I found the Facebook message inviting me to do a guest post for Suite T.  It gave me pause, not because of my lack of online social skills, but because of the regionality of the publication. My cozy mystery, Clouds Over Bishop Hill, takes place in a midwestern village widely noted for its Swedish-American heritage. I cautiously clicked through to Suite T and began reading posts. I was stopped by this quote: “…if the choice were between a brilliant student with no ambition and a poor student with drive, he would always bet on the student with determination.”

That struck me as very familiar as was the name of its source, William Price Fox. A quick search confirmed this southern writer indeed was the author who lead me through the closest thing to an Iowa Writers’ Workshop experience I would have while in college. Whose advice was to write a killer first chapter, and don’t worry too much about it matching anything else. That first chapter sells the book.

Mary Davidsaver lived in Bishop Hill, an Illinois state historic site and a national historic landmark, first as a silversmith and then as a writer, for twenty-four years. During that time, she began writing for local newspapers and won an Illinois Press Association first place feature photo award. Since returning to Iowa she has won two Iron Pen first place awards and was the first local writer to win the Great River Writer's Retreat Contest. She has published her first novel, Clouds Over Bishop Hill, with MWC Press, an imprint of the Midwest Writing Center. She was honored as the Outstanding Literary Artist of 2017 by the Midwest Writing Center. Social Media links: Website: https://marydavidsaver.weebly.com/ Blog http://marydavidsaver.blogspot.com/ Facebook author page: https://www.facebook.com/MaryDavidsaverAuthor/ Twitter handle is @mrdavidsaver