Billy Graham and The Queen 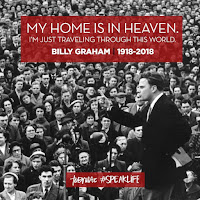 Last week, I learned with the world of the earthly death of Reverend Billy Graham. He was from humble beginnings and rose through his tent-revival style ministry. His voice, mannerisms, and delivery of his non-denominational sermons led hundreds of thousands to Christ. He was a sought after advisor and counselor to heads of states, Presidents and yes, the Queen of England. As one image on Facebook shared by singer, Toby Mac, quoting Billy Graham, “My Home is in Heaven, I’m just traveling through this world.” Travel, he did.

My mother introduced me to Billy Graham as a child. Anytime his sermons were televised, we sat and watched. She had all the books written by Billy Graham and his wife, Ruth. She traveled to Graham's The Cove  with a church group and met him. That was the thing about Billy Graham, he was comfortable meeting with people from all walks of life, from “wide spots in the road” to Presidents and Queens.

In December, the Billy Graham Evangelical Association posted about Graham’s friendship with Queen Elizabeth. It stated, "Whenever he came to England [the Queen] would invite him to preach, and often when she came to America—the Queen would come to America more often than people realize, on private visits to see the race horses in Kentucky—and she would often visit with Billy Graham because they had the same fundamental Christian faith. No one in Britain has been more cordial toward us than Her Majesty Queen Elizabeth II. “Almost every occasion I have been with her has been in a warm, informal setting, such as a luncheon or dinner, either alone or with a few family members or other close friends. Her official position has prevented her from openly endorsing our crusade meetings. But by welcoming us and having me preach on several occasions to the royal family at Windsor and Sandringham, she has gone out of her way to be quietly supportive of our mission.”


The Crown is a well written and acted Netflix, exclusive show that is historically inspired by Queen Elizabeth’s rise and reign but dramatizes events for effect with crisp, compelling dialogue woven with intertwining events. In Season 2 Episode 6: Vergangenheit (Germany for "period of time that has already happened") finds the Queen watching on a black and white tv, a young Reverend Billy Graham preach to a packed stadium in London. His first crusade in London far surpassed their expectations. The show depicts Graham’s firey preaching style piquing the queen’s attention. The Queen insists for a private meeting with him at the palace. The Queen, after all, serves not just as head of state but head of the Church of England, the “mother church” of Anglicanism worldwide. So meeting with a “crusading evangelist” was somewhat tricky.
In this episode the Queen tells Graham at their meeting following a sermon for the royal family at Windsor Castle, “You do speak with such wonderful clarity and certainty.”  Queen Elizabeth, says that she felt “a great joy” to be “a simple congregant, being taught, being led … to be able to just disappear and be…“ “A simple Christian,” says Graham. “Yes,” Queen Elizabeth says. “Above all things, I do think of myself as just a simple Christian.” Thus, a friendship began between the Queen of England and Billy Graham. Did this exact conversation take place? Who knows? But the television writers have my total attention throughout this series and especially this episode. It’s not uncommon for me to stop the show and Google to see if something happened this way.
It is clear that Billy Graham and Queen Elizabeth were friends but like with your own close friends, you guard their confidences. Having met in 1955, theirs was a friendship that lasted half a century. Billy Graham, an author of numerous books wrote in his autobiography, Just As I Am, “Good manners do not permit one to discuss the details of a private visit with Her Majesty, but I can say that I judge her to be a woman of rare modesty and character.”
Do you have a Billy Graham story?