Tom Petty, The Swamp and Branding 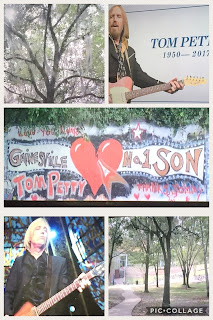 The world mourned last week,  news spread that Tom Petty had suffered a fatal heart attack. His fans on social media linked thousands of their favorite Petty songs and were constantly being uploaded and shared. He was one of those rare musicians who everyone wanted to work with, a talent and nice guy. Tom Petty and his band the Heartbreakers received keys to their hometown of Gainesville, Florida in September 2006.

Erick Smith is the University of Florida’s urban forester. He confirms in an article there is a Tom Petty tree on campus. Although Tom Petty never attended the University, he worked on the grounds crew at the University of Florida. During his time there, Petty planted a tree that is now known as the Tom Petty Tree. It is an Ogeechee Lime Tree. While watching the game, the TV announcers remarked how Petty's tree was in the shadow of the university's football stadium, The Swamp.

Numerous tributes to Tom Petty have occurred since his death.. On Saturday at the Florida-LSU game in The Swamp between the third and fourth quarter, the stadium speakers played Petty's, “I Won’t Back Down" with the 90,000 fans singing in tribute to Petty.

University of Florida graduate, Steve Spurrier returned as football coach in 1990. Spurrier wanted UF fans to have pride and passion in their football team. The stadium started as Florida Field, built in 1929 out of a marshy depression. Before construction, the area had to be drained due to an underground spring that was capped. There was such a big hole in the ground, the stadium actually was built from the the ground down. The top row of seats in the stadium (Row 32) was the same height as the surrounding area. The rest of the stadium was below ground level. In 1992, Spurrier nicknamed and gave the football stadium a new brand name. As Spurrier explained “The Swamp is where Gators live. We feel comfortable there, but we hope our opponents feel tentative. A swamp is hot and sticky and can be dangerous. We feel like this is an appropriate nickname for our stadium.”

Spurrier, like Petty, knew that branding is important for any product. Whether it's the world of collegiate football or world-renown rock and roll branding is everything toward your success.. As writers, we need to plan on planting trees (our books) with deep roots in the muck of a swamp (our publisher, either self published or traditionally published) so readers can  identify readily our books with us as authors to create our brand.

Where to start? Create your own author motto. It's really a PMS, no not that PMS it's a Personal Mission Statement. It is your branding tagline. Readers will know what you and your books are about and help you create a loyal fan base.

What is the brand you have created for yourself as an author?