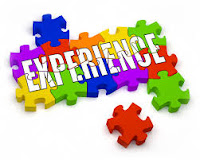 “Write from experience,” experts tell us. That might be helpful advice if you’re an international spy or someone who’s survived twelve divorces and found true love at last.  Those of us who lead quieter lives might be out of luck—unless we take a closer look at the word “experience.”

The best advice for writers I’ve ever found comes from an 1884 essay called “The Art of Fiction” by Henry James, author of such classics as Portrait of a Lady and The Ambassadors. It’s good advice not only for fiction writers but also for nonfiction writers, playwrights, poets, all writers.  James agrees we should write from experience but thinks “experience” should be defined broadly enough to include our observations, impressions, and insights.  Experience, he says, is “a kind of huge spider-web of the finest silken threads suspended in the chamber of consciousness, and catching every airborne particle in its tissue.” “When the mind is imaginative,” he says, “it takes to itself the faintest hints of life, it converts the very pulses of the air into revelations.” So we don’t need to live glamorous, adventurous lives to have experiences worth writing about. But we do need to make sure no sliver of useful experience slips past us—or, as James far more memorably puts it, “Try to be one of the people on whom nothing is lost!”

How does that work? Here’s a quick example. Years ago, when my husband and I were having dinner at a restaurant, I noticed an elderly man sitting alone at a table, going through a strange little ritual. He took a sip of his martini, then splashed a few drops from his water glass into his martini glass. Another sip, another splash—he kept it up until both glasses were empty. When a waitress brought him soup and a roll, he wrapped the roll in a napkin and stuffed it in his pocket; when she brought him a sandwich and coffee, he wrapped up the sandwich and stuffed that in his pocket, too.  He was still drinking coffee, slowly, and looking around the room when we left.

In the following days, I found myself thinking about that man, about the martini-and-water ritual, about the careful wrapping and saving of food. There must be a story there, I thought. So I made one up. “Table for None” was first published in Alfred Hitchcock’s Mystery Magazine in 2008 and now appears again in my short story collection, Her Infinite Variety: Tales of Women and Crime.

B.K. (Bonnie) Stevens has published over fifty short stories, most of them in Alfred Hitchcock’s Mystery Magazine. She has also published stories in magazines such as Woman’s World and Family Circle, as well as in several anthologies. Her stories have been nominated for major mystery awards such as the Agatha (three nominations), the Anthony (one nomination), the Macavity (two nominations), and the Derringer (three nominations, one award). Also, one of her stories won first prize in a national suspense-writing contest judged by Mary Higgins Clark. Eleven of her stories are included in her 2016 collection, Her Infinite Variety: Tales of Women and Crime (Wildside Press). She has also published two novels. Fighting Chance (Poisoned Pen Press; Agatha and Anthony nominations for Best Young Adult Novel) is a martial arts mystery set in central Virginia. Interpretation of Murder (Black Opal Books) is a traditional whodunit offering readers insights into Deaf culture and sign-language interpreting. B.K. has also published an e-novella with Untreed Reads, articles in The Writer and The Third Degree, two college textbooks with Holt/Harcourt Brace, and a book on Jewish education with Behrman House. She was an English professor for over thirty years and often taught classes in writing, including creative writing. She and her husband have two grown daughters and live in Hampden-Sydney, Virginia with their self-satisfied cat. Website:  www.bkstevensmysteries.com
Amazon author page: https://www.amazon.com/author/bkstevens  Facebook: https://www.facebook.com/profile.php?id=100003534785806

Email ThisBlogThis!Share to TwitterShare to FacebookShare to Pinterest
Labels: B.K. Stevens, Fighting Chance, Henry James, Her Infinite Variety: Tales of Women and Crime, Interpretation of Murder, Portrait of a Lady, The Ambassadors, The Art of Fiction, The Best Writing Advice