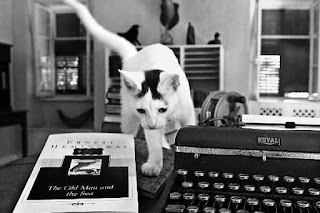 Last Thursday, I posted an interesting picture as an inspiration to write a caption in six words or less. Several readers had some great captions. Here is the link to Part One and check out all the comments.

In watching all the news about Hurricane Irma's approach towards the United States, I was concerned about all in its path. I spotted an interesting story about the director of Ernest Hemingway's home in Key West. It is now an impressive museum filled with personal articles of Hemingway. CNN reported, "Dave Gonzales, executive director of the Ernest Hemingway Home and Museum in Key West, confirmed to CNN that he and nine other employees were staying through the fierce winds and rain expected with Hurricane Irma, staying the legendary author’s 1851 house, with its 18-inch-thick limestone walls is “the strongest fortress in all the Florida Keys.”

One of the main reasons they are staying is to keep the unique 55 cats (they have either six or seven toes) safe and comforted during the storm. Some of these felines are descendants of Hemingway's own six toed cat, "Snow White." Each volunteer will be attending 5 cats while riding out the storm in Hemingway's house. Yes, everyone is safe after Hurricane Irma made US landfall at the Florida Keys according to this article in the New York Post.

I wonder if Hemingway came up with the six word stories because his cat had six toes. Just wondering. None the less his story is famous and haunting..."For sale: baby shoes, never worn.”

According to an article in The New Yorker, "Legend has it that Ernest Hemingway won a bet by writing the six-word story “For sale: baby shoes. Never worn.” Hoping to cash in on that story's success, Hemingway wrote some six-word sequels."  Here is the link to the article with the Hemingway's sequels. 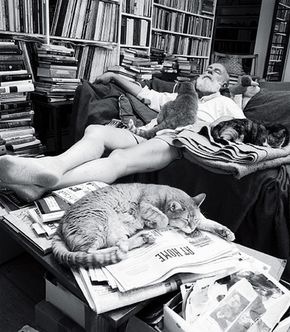 National Public Radio has an excellent article titled, "Can You Tell Your Life Story In Exactly Six Words?" Some if the response are from the famous and the not yet famous. From "Gloria Steinem ("Life is one big editorial meeting"), to author Frank McCourt ("The miserable childhood leads to royalties".)

A six word story is an excellent prompt to spurn a writer's imagination. It's simple and almost poetic. You can check Reddit or Tumblr six word stories or numerous groups on Facebook for examples.

This exercise is a great jump start, especially on those days you start with a blank screen or piece of paper and no ideas.