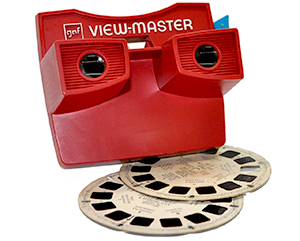 It's been a long time since I hung out in the toy department, but on a recent visit I was surprised to see that one of my childhood favorites was still around. Perhaps at some point you also owned a View-Master. I can still hear the voice of actor Henry Fonda hawking "the G.A.F. View-Master" on TV spots.

This plastic viewer, held up to the eyes like a pair of binoculars, let you experience genuine 3D images. Depending on which disc you inserted, you could see stereoscopic views of everything from the Grand Canyon to popular TV shows. Grimm's Fairy Tales and stories from the Disney archive were among the more popular titles.

As you manually advanced to each of the seven scenes on a disc, a tiny window displayed a few words describing what you were seeing.  Which meant that an entire story had to be told in seven scenes.

Does that tell you something?  What it suggests to me is that a good story can be broken down and told in as few as seven simple plot points.

Apparently the View-Master isn't alone in thinking this way.  Numerous writing resources spell out classic seven-point outlines.  There are variations, but here's a common breakdown:

1. The Beginning
A setup that establishes the character in his/her current circumstances.

2.  Plot Point 1
An inciting event, a catalyst that changes the status quo.

3.  Pinch Point 1
A personal challenge that requires the hero to take action.

4.  Mid-Point
At this point of no return, the hero is fully committed and proactively tries to fix things.

5.  Pinch Point 2
The hero fails. At this low point an additional crisis makes it appear that all is lost.

6.  Plot Point 2
The final confrontation with the antagonist.  Most of the time, the hero will prevail.

7. Ending
This satisfying epilogue reveals how things are in the new normal.

In an 80,000-word novel, that translates to roughly 11,400 words for each point.  But if you break your story down to its key elements, you could convey it in a one-minute summary suitable for an elevator pitch or a workable outline for whatever novel you're working on.

Granted, a picture is worth a thousand words — and the View-Master showed seven of them — but the brief text that accompanied each slide told the same story in the sparsest words possible.  When plotting your next story or pitching to an agent, think like a View-Master and you can stir your reader's imagination in vivid 3D.