Whenever I run my Fearless Writing for Women workshops, I usually have a waiting list. Many women who want to write are afraid that they aren't good enough, have nothing to say and that if they do write something it will be criticized. While they enjoy writing, and may even love it, the ensuing battle between love and fear can paralyze them. And, of course, this happens to men, too.

So is fearlessness the answer? Actually, it was only after I had taught several workshops that I realized fearlessness isn't the goal. Making peace with fear is, and realizing its relationship to creativity.

Whenever we’re being creative, fear is generally nearby. Especially if we hope to put whatever we create out into the world. For example, I have been writing novels for twenty years. Two of my novels have been Amazon and Nook #1 bestsellers. One of them (The Secret Sense of Wildflower) received a starred review from Kirkus Reviews and was named one of their Best Books of 2012. Yet this doesn’t stop me from questioning if I’m a good enough writer. Whenever I start a new novel. I worry (another name for fear) that my imagination will dry up, I'll have nothing to say and I will have forgotten how to write a good story. However, I keep writing year after year, and to some I may even appear fearless.

How do I not let fear stop me? Here's the short answer: I know myself well enough to recognize the script that runs in my mind and the minds of many creative folks whenever fear is around. It consists of lines like: You’re (or I’m) not good enough. Who do you think you are? What will people think? When I hear those fearful thoughts, I acknowledge them, but I don’t let them stop me. Fear is a normal part of the creative process and is often temporary. If I get busy writing, the fear goes away. I’m suggesting that you do the same. 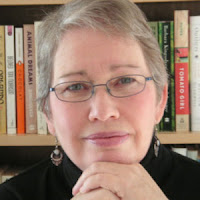 A former marriage and family therapist, Susan Gabriel is the acclaimed southern author of Amazon #1 Bestselling novels  ﻿The Secret Sense of Wildflower ﻿(named a Best Book of 2012 by Kirkus Reviews) and Temple Secrets﻿. Her other books include Lily’s Song, the sequel to The Secret Sense of Wildflower and Grace,Grits and Ghosts: Southern Short Stories. She lives in the mountains of North Carolina.  Author website:  www.susangabriel.com. Author Facebook page: https://www.facebook.com/SusanGabrielAuthor