Who’s telling the story? This is the first question a writer faces when beginning to structure his or her story.  Will the plot unfold through one person’s point of view? Or will there be many narrators such as William Faulkner employs in As I Lay Dying?

In my first novel, Moon Over Taylor’s Ridge, I used the voice of a first-person, female narrator.  Although somewhat limiting in showing all that was going on in the story, I was able to show the bigger picture through other characters’ dialogue and actions, and through what my narrator sees or thinks.

In my second novel, Return to Taylor’s Crossing, I wanted to explore the impact of two violent attacks on all those involved.  The story begins during the Civil Rights era and follows some of the characters for fifty years. In my first draft, I used third person omniscient which allowed the reader to see inside all of the characters’ minds as the story unfolded.  This sometimes created confusion although I used only one point of view in each paragraph. Thus, one paragraph would show the inner thoughts of one character and the next one the inner thoughts of another. It was clear to me, the writer, what was going on, but when I workshopped my novel, I found I had confused some of my readers.  Also, whipping back and forth inside everyone’s head created a “head hopping” effect.  And just between you and me, one paragraph does not a deep relationship make.  I really wanted to get into my characters’ heads, but instead I felt I was watching a well-orchestrated ping pong game.

I researched writers I admired to see their point of view choices.  Sue Monk Kidd, one of my favorite authors, uses two narrators in The Invention of Wings.  I toyed with using two narrators but soon realized my cast of characters was larger than that. I decided I’d expand my narrators to six characters, three African American and three white.  Each would have his or her own chapter, and each chapter would move the plot forward in some way.

Oddly enough, when I gave the characters their own chapters, they started revealing themselves to me in ways they had not when I only spent a few paragraphs at a time with them. My first approach, third person omniscient, was like speed dating with my characters while spending a whole chapter with each of them was like an all-day picnic. 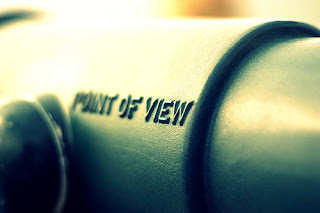 This multiple point of view method was not without its challenges.  For example, which character would be the best one to describe a certain scene? Probably the one most impacted by the action, I reasoned.  I found myself wanting to reveal more, share all I knew, but always I had to pull myself back into the structure I’d created.

One character, Xylia, owner of the general store where some of the action takes place, kept wanting to have her own chapter.  I finally gave in and let her have a chance mid-way through the book. If I am honest and include Xylia’s chapter to my list of narrators, my story is really told from seven points of view: six main characters and one minor one.

A Chattanooga native, Janie Dempsey Watts grew up riding horses at her family farm in Woodstation, Georgia. Her curiosity about most everything steered her to journalism and a writing career. Her new novel Return to Taylor's Crossing won first place in the Knoxville Writers' Guild novel excerpt competition. Her first novel, Moon Over Taylor's Ridge, was a Georgia Author of the Year Award nominee for a debut novel and nominated for a S.I.B.A. She enjoys speaking to Friends of the Library, book clubs and to other groups about her storytelling roots and writing process. Her stories have been published in magazines and anthologies including the 2014 fiction collection, "Broken Petals." In addition to her stories in five "Chicken Soup for the Soul" books, another of Janie's non-fiction stories, "Picture Hat," is in "Project Keepsake," an anthology published in March, 2014.  After living in California for many years, she returned to northwest Georgia to live near the family farm. She is married and has two grown sons and two grandchildren. When not playing with her horses at the farm, she can be found at her desk writing with her American bulldog, Bella, supervising. For a complete list of her published works, and more on horses, please visit her at: www.janiewatts.com