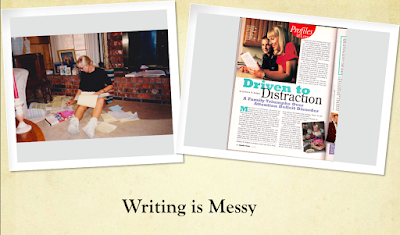 Writing is a messy process. After nearly forty years of writing for publication, I’ve learned to trust what works for me. Every article I sold to Family Circle Magazine, Military Times, and many other publications, started out like this: first thoughts scribbled on whatever paper was at hand.

Sometimes I use legal pads or journals given to me by family members or friends. I joke that my first novel, The Final Salute, was cobbled together using sticky notes and index cards.
In 1998, I signed my fifth contract with Family Circle Magazine to write a 2500 word article about attention deficit disorder. Even before I pitched the article to my editor in a query letter, I’d accumulated hundreds of notes on every form of paper available. Once the ink dried on the contract, the pressure was on.

With notes fanned out in front of me on my living room floor, I attempted to puzzle together a story that I was getting paid a lot of money to write. For me, the only way to bring order to chaos is to wade through it. I did what I always do. I took a deep breath and plowed in. After several revisions, “Driven to Distraction” appeared in the October 1998 edition of Family Circle Magazine, where it was read by millions of readers around the country.

For my second novel, Johnnie Come Lately (Camel Press February 1, 2015), my first thoughts were captured in a spiral notebook for a novel writing class I took at Southern Methodist University. Once I got a few words down, I moved to my laptop.

Throughout the six years it took to write and revise this novel, many of my best lines were written in the margins of church bulletins, school programs, grocery store receipts, napkins from eateries, and the occasional paperback I happened to be reading at the moment my mind wandered from the path of reading to writing.

About eight months before I finished the manuscript, I dumped my work onto my kitchen table and attempted to organize the chapters. I’m old school in that I need to see the physical pages of the manuscript as I work. Holding each scene in my hand helped me see where I needed to revise an opening line or create a better transition from one scene to the next. 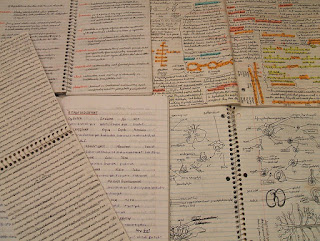 I’m in the middle of writing my third novel, and once again I am learning to trust the process. Now that my children are grown and I no longer have the need to go hide in my home office, I find myself back at the kitchen or dining room table, attempting to create characters that people will care about. Each night when I go to bed, I place the current scene I’m working on in between my alarm clock and my TBR pile. Having the physical pages close to me before I drift off to sleep is a reminder that my characters are depending on me the next day. Just like my young sons depended on me when they were young. They trusted that I would be there for them each morning when they woke up.
___________________________________________________________________