10 Things Writers Can Learn from The Beav


Today being June 2nd—the birthday of Jerry Mathers—I thought it would be a fitting tribute to recognize some of the things any writer can benefit from through the TV classic Leave It to Beaver.

1. Give your characters a believable setting
The fictional town of Mayfield gained credibility via regular reminders of local landmarks like the malt shop, the fire station, and Friends Lake. Leave It to Beaver purposely included more outdoor shots than most other sitcoms of its time. A strong sense of place gives added personality to the story.

2. Find drama in simple things
Nowhere in its run from 1957-1963 do we experience explosions, hostage situations, backstabbing housewives, etc. The worst we might see is kids hiding an alligator in the bathtub. The innocence of childhood running into itself kept audiences tuning in every week for six years.

4. Make your antagonist entertaining
It would be unfair to call Eddie a villain, but his talent for instigating trouble can't be written off, making him TV's most popular second banana under 21.

5. Write dialogue that fits the character
June, Ward and Ward's coworker Fred Rutherford were age-appropriate and eloquent. Beaver, Wally and their friends, meanwhile, frequently engaged in slangy kidspeak. From "gee whiz" and "crummy" to "rat" and "creep", they were always giving each other the business.

6. Genre-hopping can be fun and profitable
The head writers of Leave It to Beaver had previously spent twelve years writing for the Amos and Andy radio show. Many find it ironic that they wrote one of the most controversial radio shows and one of the most white bread TV shows of all time. What they had in common was uncommonly brilliant humor.

7. Write from life
Head writer Joe Connelly drew many of the show's scenarios from his own seven children. He jotted notes and wrote ideas when observing them with their friends. The episode when Beaver wore a knitted cap in the school photo to hide a butchered haircut? His son did that.

8. Have teachable moments
If kids sneak into a movie theater, they get caught. If parents misinterpret their kids' good intentions, apologies are in order. Audiences learn the lessons of life from stories that relay a strong moral code of right and wrong, action and consequence. 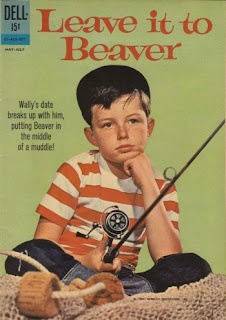 9. Branch out
Board games, lunchboxes and packages of cereal were just a few of the merchandising tie-ins the show capitalized on. Many of today's savviest authors offer their fans recipes from their heroine's kitchen, or post video trailers as slick as a preview for the next Hunger Games.

10. Choose your title with care
The show was originally going to be called Wally and the Beaver. It got changed when sponsors thought it sounded like a nature program.

Good writing principles never go out of style, and the legacy of Theodore and company can serve us well even six decades later.  Flesh out the heartbeat of your story with an entertaining reflection of reality, and your own Mayfield will come to life.

And may I say you're looking quite lovely today, Mrs Cleaver.