It’s Flooding Down in Texas

The recent floods in Texas reminded me of the late Texas Bluesman Stevie Ray Vaughan’s version of “Texas Flood”; “Well it’s flooding down in Texas, all of the telephone lines are down”.  “Texas Flood” written by Larry Davis and Joseph Scott in 1958 quickly became a blues standard recorded by many artist. The song is of a lost love that he is unable to reach due to the floods and eventually returns home, his love a victim of a natural disaster.

Natural disasters have been the center point of many a story, song or movie. Having a larger than life character such as a hurricane, tornado or flood which adds not only difficulty but lack of control to the obstacles one must face in the story. Texas seems to have had it share of flooding this year and as we speak a tropical storm named “Bill” is again pounding the Houston area   with more rain and flooding.

We have seen in recent weeks the stories of life lost and life miraculously saved has come our way from this disaster. The small towns of Boerne, San Marcos and Wimberley all had their tales. With this return of the rains we will more than likely hear more. This was not Texas’ first nor was it the largest.

On September 8, 1900 in Galveston Texas, Hurricane Galveston came ashore with 135 to 145 mph winds and flooded the island. At that time Galveston was the largest city in Texas and although a seawall had been considered the city sat unprotected from the sea. Estimates of the dead were anywhere from 6,000 to 12,000 lives. Officially 8,000 was the number settled on. It was the deadliest storm to have ever struck the United States. The great city of Galveston never returned to its glory as a commercial center or culturally as the “New York of the South”.

We all stand in awe with the accounts of a natural disaster’s damage to property and life. Many times we look upon the account as one would look upon a documentary. At arm’s length we observe, taking in the wonder of it all and the unimagined hardship of those involved. It’s not until we connect personally with a victim’s family, livelihood or possessions do we fully take on the enormity of the event. Many times we can relate due to our unfortunate pass when we too suffered through such an occurrence. And as has happened many times in this country, earlier victims come to the aid of those currently suffering. That in itself is a great story and one that needs to be told. 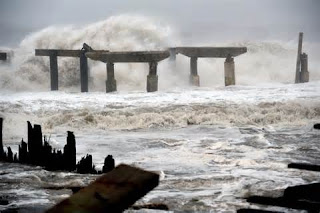 As great as the story of a disaster can be it can be even greater with the struggle of the individual as the center of the story. “Texas Flood” became more interesting with the struggle of one seeking his love. As a people, overcoming such events is what we do and what better way to celebrate it than to tell a great story about that. If you have such a story I would like to hear about it.