There Oughta Be a Flaw 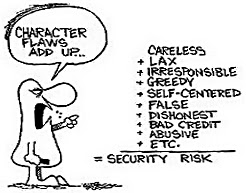 In virtually every story we write, it's a given that we will give our hero challenges to face.  Those obstacles we put in his/her path are likely to be external in nature, delivered by either circumstances or an antagonist.  But we can increase the drama further by slipping in some internal struggles for our hero too.

Besides making our protagonist more lifelike, a character flaw has the power to add the fascinating element of irony.  A hero who becomes the guardian of his brother's kids will have a worse time of it if he had vowed never to have children.  An eyewitness in a murder trial will find it harder to testify if he was somewhere he wasn't supposed to be.

The "inner demon" doesn't have to be anything illegal, immoral, or fattening.  It can be a guilty conscience, a moral dilemma, the fight between the angel on one shoulder and the devil on the other.  Anything that creates personal turmoil is material for mayhem.

It can feel against the grain to make our hero imperfect, especially if we write in first person, because our own voice is inherently caught up in there on some conscious or unconscious level.  If it helps distance you from your character, seek out a trait you don't possess.  Need some ideas?  The Seven Deadly Sins could be a source of inspiration.  If you can remember all seven and don't have to look them up, more power to you.  I can usually only remember the ones I've gotten good at.

Depending on what you're going for, a vulnerability can elicit sympathy more than a flaw.  By the same token, a flaw is something you can work into your character arc. 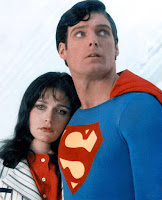 The most unflawed character in all of fiction would probably have to be Superman.  Here's a guy who possesses superhuman powers and uses them for the public good.  Yet he is vulnerable to kryptonite, much less the designs of a femme fatale who steals his invincible heart.  If Superman didn't possess qualities that could weaken him, he would be as plastic as the toys made in his image.

Whether our protagonist is a "hero" in the truest sense of the word, or an underdog who must rise from the ashes, we give our story layers by including an Achilles heel above and beyond the main conflict.  The reader may not have personal experience with a tsunami or a kidnapping, but everyone knows what it's like to be human.