The Politics of Logos

We see them so continuously that they are burned into our brains. Much like the cowboys who claimed cattle via their initial on the end of a hot poker, companies spend millions reinforcing an identifiable brand logo in an attempt to claim customers.

The Burger King name inside a bun, the “e” in Dell resembling a circuit board being plugged in, the Fox logo with searchlights, and the colorful NBC peacock all evoke a vivid representation of what the company stands for. While Colonel Sanders has gone on to that great deep fryer in the sky, his grandfatherly image remains more inviting than, well, that of a chicken. And the FedEx logo, with its subliminal arrow, does a fine job of telling you they’ll get your stuff from here to there.

You don’t even need the name to identify the logos above. (And isn’t it interesting that they’re all somewhat circular?)  Indeed, they’ve gone around and around in our consciousness so repeatedly that we see the CBS eye and instantly know what network they want us to watch with ours. From the cooperatively-connected colors of national flags to Alexander Graham’s , these all convey a bit of what the company stands for.

But what if you don’t have a target, shell or bat in your name to get creative with?  That’s when you often see an extra graphic added to the equation:

Nike’s speed-suggesting “swoosh” is so famous it can stand alone without the company name (notice that both the name and the swoosh are trademarked). On the other hand, Walmart, Sears and Macy’s feature less meaningful symbols which cannot stand alone. Meanwhile, Pepsi’s design (another circle BTW) is unique enough to never be confused with another brand, plus it incorporates the red, white and blue befitting an all-American drink.

Which brings me to this (potentially unsettling) question: What do we authors have in common with politicians?

Well, both we and they face an interesting challenge. Our successful marketing recognition depends on getting our name out there, just like Starbuck’s or Hershey. But an individual seeking to be in the public eye is not a product, or a company, but rather a person.

Authors don’t do special logos with our name, but we still do branding. It comes in the form of our book covers. Our websites. Are they creative and appealing?  Distinctive?  Do they reflect what we write?  Before the audience reads the first chapter of a novel, or hears the first campaign speech, they’ve already formed an opinion of what we’re about, based on our visual introduction.

Later this month I’ll show you some great graphicals that authors have used to successfully brand themselves. In the meantime, since we’re in the thick of political season, I though we might have fun today with a poll of our own.

Below are the bumper stickers of the five politicians campaigning for President this fall (in alphabetical order for impartiality). 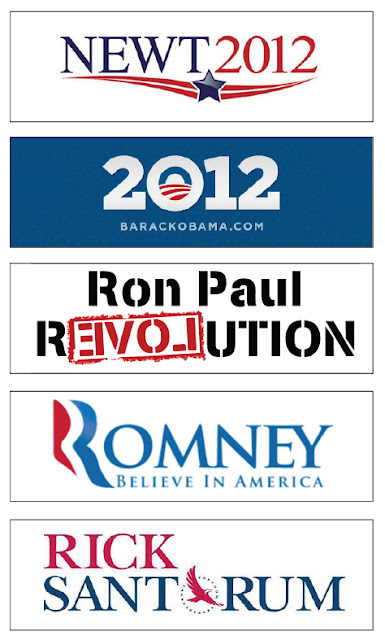 In your opinion, which of these logos works best? Try to dismiss your thoughts of the candidates themselves, and evaluate whose branding is the most effective, based purely on the visuals. It’s Tuesday, so cast your vote! I’ll give you the results next week, my fellow Americans.

(Look in the right hand sidebar to see our official poll and vote there. Also comment below and tell us specifically what do you like or dislike about a particular politician's logo.)