The Gift of Counting the Cost


With Black Friday behind us, I was thinking about some of the reasons I do not participate. I weighed the cost of rising early after a great Thanksgiving Day feast, fighting the crowds and chancing the item will not be sold out when I got there, against the savings on the item. The savings never seemed to win out.
I was not willing to pay the cost. This is something we as writers have in front of us as well. Are we willing to pay the cost to have a successful book? I guess the first question would be what is the cost.
Let’s look at the cost of an all-time bestseller. In 1978 Dr. M. Scott Peck wrote The Road Less Traveled. He saw his dream begin with a $5,000 advance. Simon and Schuster published 5,000 copies for $7,500. In order to complete his dream of a best seller he began the lecture circuit and a series of interviews which turned out to be over 1,000 interviews the first year. He also personally sought out reviews in key publications. For the next twelve years he continued at the pace of at least one interview per day. The results were 6 years later in 1984 he had a New York Times Best-Seller which remained on the list for 540 weeks. It sold over 10 million copies. Would The Road Less Traveled have sold as well without the author’s hard work? We may never know but I would think not. 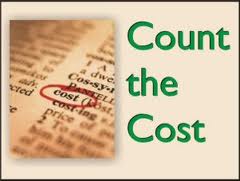 Things have changed since 1978. The most notable developments being social media, eBooks and all things digital. What hasn’t changed is the hard work necessary to get the results. We think nothing of movie stars hawking their wares on talk shows and at film festivals. Writers must do the same. Steven King said, “Talent is cheaper than table salt. What separates the talented individual from the successful one is a lot of hard work.”  Once you have written that great American novel, be ready to really get to work.
This holiday season, why not give yourself a gift - the gift of counting the cost? It will be worth every minute of your time and once you hit that best-seller list you will realize you'll be glad you did.