"Ehhhhhhhhhhh, I give this Facebook page two thumbs up." The coolest dude in Milwaukee would not click to register his like. He'd probably just thump the side of the computer screen and it would magically appear. The better question isn't how the Fonz registered his like but why. We'll unlock the answer by making our pages more Arthur Fonzarelli and less Ralph Malph.

Whether Richie was in an unfair fight or Joanie was in a compromising position, the Fonz always showed up. You build a successful page by being an active participant in it. Comment back when someone drops in. Post updates three or four times a week. Occasionally I'll visit a Facebook page that hasn't been had a post since October 2010. If you aren't hangin' around the juke box, nobody else will dance.

Fonzie Had a Cool Name

Have you ever seen a facebook url that looked something like this? www.facebook.com/wowthisisareallylongname/userprofile/#!/whatintheworldisallthisstuff/123456789 This is the Facebook url of an Arthur. If we want to be a Fonz, we need a direct url. With just 25 likes, you can claim your cool at www.facebook.com/username with a custom url such as: www.facebook.com/coolestwriterever. The next thing we know, you'll write wearing leather.

Fonzie Had Something Worthwhile to Say

The Fonz was a man of few words. Therefore, the ones he used were heeded. We'd do well to follow his example. 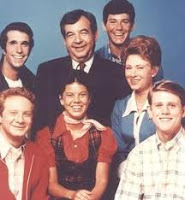 We spent many hours in the Cunningham's home but we never watched them cut grass for an entire episode. Mr. Cunningham would occasionally show up at the hardware store but he never spent thirty minutes explaining the difference between a circular saw and a drill. To be successful on Facebook, we need to invite our friends and followers to the family dinner table without serving them meatloaf every week. Keep our message simple and others will read it.

Grab a malt and hop over to Facebook. Implement a few quick changes. In no time, your fan page could garner a like from Arthur, Potsie and even Mrs. C.