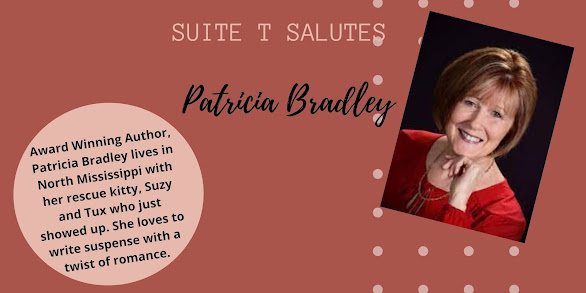 Suite T is bringing author Patricia Bradley to our blog today for readers to get to know more about her personally and her books.

If you ask Patricia Bradley what is her top priority she says, "To honor God through my writing."  She has done this in every book she has written.

She is a Romantic Suspense writer who lives in the "Deep South." It is often said "She writes suspense with a twist of romance."

You will be interested to know that Patricia's first published works were short stories that Woman's World published. You won't want to miss reading one of these stories. Here is a link to one of those short stories called Blood Kin~A Biter-Bit Story

From there her writing took off with her creating those wonderful romantic suspense novels we can't get enough of. She also created a couple of novellas. Everytime she has a new book out readers are waiting in line to get them. How do I know this? I know because I am one of them. I hate for the book I am reading to end!

We talked about how she became a writer. She said, "I was a reader until I turned thirty-five. That was also the year I couldn’t sleep, and one night as I lay in bed, staring at the ceiling, an older man appeared in my vision. He stood at a window with smoke stacks billowing behind him. He turned to me and said, “This isn’t the way my life was supposed to turn out.”"

I wanted to know more about this man in the vision. She continued, "After hearing the man's  statement, I was intrigued and I began telling myself stories of the different things that went wrong in his life. It wasn’t long before other people came to live in my head, and they refused to leave until I wrote their stories down…on a blue Hermes 3000 portable typewriter. Woman’s World bought the very first short story I wrote—"The Snow Leopard.”

Patricia is a goal setter in her writing on word count verifiying often where she stands with her word count and how many more words she needs to in order to reach her goal.

But what does this author do when she is not writing? One outlet is speaking to groups, such as students and adults on abstinence and healthy relationships.If you would like to have Patricia speak to your group you can contact her here.

So what does she do when not writing or speaking? She throws mud on a wheel. She said, "I try to make something beautiful! Long before I became a published writer, I saw a potter working the clay, making beautiful vases and bowls. I immediately knew I wanted to write a story with a potter as my heroine. Since I knew nothing about ceramics, I took lessons for a year and a half. That was back in 2001. It was another ten years before I’d use what I’d learned in a story. But I did use the pottery in my “day” job as an abstinence teacher to show teens how they could reclaim their lives if they made a mistake in the same way a potter reclaimed clay he messed up. At the end of our sessions, I took a portable potter’s wheel into the class room and demonstrated how easy it was to ruin a vase or bowl on the wheel. Then I showed how I reclaimed the clay to use again, and how once it was fired, no one knew a vase or bowl was made with reclaimed clay. Sometimes I think that demonstration spoke louder than anything I said.

You will enjoy this short video of Patricia on her wheel as she reveals how it relates not just to the pottery but the analogy of our lives.

Patricia's first series was Logan Point. There were four books in the series: Shadows of the Past, A Promise to Protect, Gone Without A Trace, and Silence in the Dark. Revel, a division of Baker Books published her first series. Click here to find out more about Logan Point Series . . . "The quiet town of Logan Point, Mississippi, set just outside of Memphis, is no stranger to evil, and each story is a classic tale of good triumphing over the villain.

Her next series, Memphis Cold Case had four books in the series. Justice Delayed, Justice Buried, Justice Betrayed, and Justice Delivered.You can learn more about this series here. The series has the perfect mixture of intrigue and nail-biting suspense. Award Winning Author Patricia Bradley invited her readers to crack the case––if they can––alongside the best Memphis as to offer. 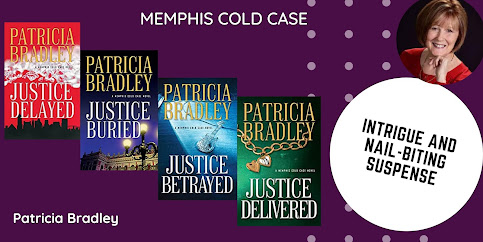 She also wrote a straight romance in September 2014 Matthew's Choice: A Clean Romance and found out it was a lot of fun. So in 2015 she added The Christmas Campaign and in 2020 The Gingerbread Pony.

The next series is Natchez Trace Park Rangers. The books are Standoff, Obsession, and Crosshairs releasing in November and then Deception releasing in the spring of 2022. Patricia Bradley introduces you to a new series set in the sultry South that will have you wiping your brow and looking over your shoulder. You can learn more about that series here.

In talking with Patricia about the Natchez Trace Park Ranger series she related an interesting story that happened during her research pertaining to one of the books. Here it is in her own words:


"While researching Obsession, the 2nd book in the Natchez Trace Park Rangers series, I needed a place to bury a body, and I knew I wanted it to be at Mount Locust. The historic site is filled with so much history and is the oldest “inn” on the Natchez Trace that still stands. It has two cemeteries, and I wanted to hide a body in one of them.

"I stopped at the ranger station and the park ranger, bless his heart, didn’t faint when I asked if there was a way to get a body onto the Mount Locust property from the backside. He told me how to get to the road that ran behind the property, but once I was done, to be sure I took a right at the next road.

"After quickly discovering the perfect place to bring in the body, I drove on, looking for that road to the right…and drove…and drove as the road wound down to a one lane sand road with bayous on each side. There were no houses and absolutely no place to turn around until about five miles later. At that point I questioned my sanity of being a lone woman on a deserted road in the middle of nowhere.

"When I finally did get turned around and back to Mount Locust, I found the road I was supposed to turn on. I had missed it because the road I was on curved to the left, and I thought the little lane on the right was a driveway."


You will want to go over and visit Patricia on her website, https://ptbradley.com/. While you are there check out her blog, you will enjoy her post and be sure and sign up to get her blog post so you will not miss it. It is very informative and a lot of fun. She has a great segment called CRIMES GONE AWRY––MYSTERY QUESTION

Be sure and sign up for her newsletter and for doing so, you will receive her novella Revenge!

You will be glad you did. It's a suspense novella about a murder that becomes a case of mistaken identity at a remote drug rehab facility. An old threat resurfaces and Andi Hollister finds herself in the crosshairs of a killer. You will not want to miss this!.

Patricia Bradley has won an Inspirational Reader's Choice Award in Romantic Suspense, a Daphne du Maurier Award, and a Touched by Love Award, and she was a Carol Award finalist.


She also has won readers from all over the world who never miss reading her books. If you have not read one, choose any one of them, and you will not put it down until you finish it, and then you will find yourself reading all of them.


So what is next on the horizon for Patricia Bradley?


"In November, Crosshairs, the third book in the Natchez Trace Park Rangers series releases, and then in the spring of 2022, Deception, the fourth and final book in the series comes out. By then I’ll have the first book in my next romantic suspense series, tentatively called The Pearl River Series, almost finished. That series is set in the Cumberland Plateau somewhere around Chattanooga, Tennessee, and features a female sheriff doing battle against the evil trying to infiltrate her small county.

"And last of all, I’m excited to take part in an anthology of short stories based on the titles of the Oak Ridge Boys’ Christmas Cookies album. Joe Bonsall, the Oaks’ tenor, is also contributing to the anthology."


We want to thank Patricia Bradley for listening to the voices that came to live in her head and writing these great books to entertain us.
Patricia keep listening and writing!
Suite T